[Mass Dispel]), at the price of being able to take no action. Ice Block also purges most debuffs.

Using Ice Block debuffs the mage with Hypothermia for 30 seconds, which prevents them from using Ice Block during that time. The effect is similar to the paladin debuff

"Ice Block" is often used as a verb, meaning to use Ice Block to avoid an attack, as in "I Ice Blocked that rogue's

[Envenom]." When Ice Block is used to remove a debuff, it is commonly referred to as "Ice Blocking out of ~", as in "I Ice Blocked out of sheep." 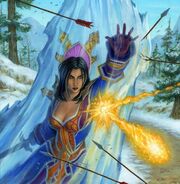 In the WoW TCG.

Casting the spell while you're already Ice Blocked (hitting the hotbar key again) will cancel the spell. It won't cancel itself on a second tap until the global cooldown has finished.

Ice Block removes most harmful debuff(s) on caster, even if the caster is not in control of their actions. This includes effects such as

[Polymorph]. Due to the technicality that it "purges" the harmful effect without specifically dispelling it, on-dispel effects like

[Unstable Affliction]'s damage and silence will not be triggered. Certain raid-level debuffs are not dispellable by Ice Block, but in most cases, it will still prevent you from taking damage.

Ice Block can be removed via 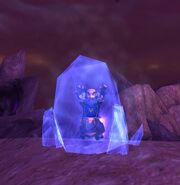 Ice Block is useful for escaping from incapacitating effects and crowd-control spells, waiting for your cooldowns, blocking a large single-hit attack (such as

[Pyroblast]), or buying time for a healer to heal you.

In a one-on-one battle, Ice Block may give your opponent time to cool down abilities, heal, or run. You should rarely let Ice Block expire on its own, but instead cancel when the timing is right, usually immediately after casting.

Ice Block can be used to avoid fall damage (see

[Slow Fall] for other ways). While Ice Blocked your character falls normally, but doesn't take any damage when hitting the ground. (In previous patches, an Ice Blocked mage would hover in the air, then begin to fall when the spell expired.)

Ice Block will prevent drowning and fatigue damage, and reset the damage counter (not the bar) to zero. You will still lose breath and become fatigued while Ice Blocked.

Ice Block is powerful enough to remove almost any debuff, including

[Living Bomb]. Some notable exceptions are

Contrary to popular belief, Ice Block will not reduce your current threat level. The reason for this misunderstanding is that enemy AI is programmed to ignore you if you are invincible and move on to the next-highest target on its hate list. As soon as the effect fades the enemy may resume attacking you. However, it will prevent you from performing any actions that generate threat, allowing others (who are still attacking, healing, etc) to rise ahead of you on the mob's hate list. Use

Using this macro a mage can instantly stop casting a spell and ice block to protect themselves with no delay. This makes it very useful in PvP or PvE situations which requires you to have fast reflexes to a changing situation.

Originally, a player who Ice Blocked in midair would continue to fall normally. At one point this was changed so an Ice Blocked player hovered while the spell was active, then began to fall when it expired.

Prior to this, a mage with Ice Block and

[Cold Snap] could be protected for 20 consecutive seconds, with only a short interruption to use Cold Snap.