Not to be confused with frost giant.

The ice giants[1][2][3] are a classification of mountain giants found in cold and snowy regions. 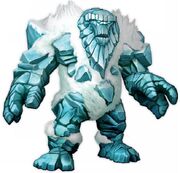 Art in the RPG

Frost giants are mountain giants found in cold and frozen regions of Azeroth. Frost giants are a rare and particularly cruel variety of giant. Some, the Frostmauls, are found in the mountains of Winterspring. Slow and patient, frost giants take great pleasure in wiping out entire herds of others’ domesticated animals or even humanoid settlements. Gangs of them have been known to prepare an attack for over a year, slowly moving and hiding among the mountains, surrounding their target, and cutting off all escape before finally beginning their assault. When the slaughter is over, nothing is left standing, and the corpses are left to rot. Not much is known about frost giant society or mentality, but many scholars theorize that, like some other giants, they are creations of the titans. If this is the case, then their purpose remains a mystery. Perhaps their most famous entry into history occurred 4,000 years ago, when Tyrande Whisperwind saved the frostsaber queen from rampaging Frostmaul giants, thereby securing the frostsabers' loyalty. A frost giant stands around 20 feet tall and weighs about 15,000 pounds. This huge creature looks like a snowy cliff face come to life. Ice and rock comprise its stout humanoid body, giving it a grizzled and ancient look. Cold, blue eyes peer beneath its snowy brow.

Attacks from frost giants are usually vicious and well-coordinated, although a frost giant avoids a fight in which it suspects it might be overmatched. If it has an advantage at range, it stays back, pummeling its opponents with rocks. If melee combat serves it better, it attempts to sunder its opponent's weapons, leaving them helpless.[4]

They take on a crystalline blue hue to their skin, their bodies packed with white snow.[4]