Not to be confused with Illiyana. 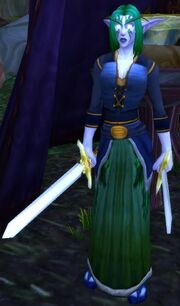 Illiyana Moonblaze is a night elf pvp vendor located in Silverwing Grove in Ashenvale. She is not a Sentinel, and it is mentioned that she "belonged to a group that was not exactly favored by most Sentinels". She is known for her roguish personality. As noted in pictures of her she wears a dark corseted outfit and wields a pair of longswords. She radiates a presence in some matter akin to a wild pirate.

Although officially an officer, and therefore in a level of command, her unofficial duties and skills are actually the most important aspect of her service. One of these roles is scouting -- but it is only called that because there is a lack of a better term to describe it. She is also noted to be a very experienced and seasoned tracker.[1]

Illiyana served as one of Su'ura Swiftarrow's scouts during the defense of Silverwing Outpost when the Horde invaded. Coincidentally, she was also the only scout to make it back to the outpost alive; she had found a trail that her experience told her was a bit too conspicuous, and so she did not follow it. She saved Su'ura's life when she was found injured by Garrosh Hellscream. With her saber distracting Garrosh, Illiyana rescued Su'ura and retreated with the surviving Silverwing Sentinels to safer territory. After the battle for Ashenvale, she was offered a commission, but turned it down as it meant more responsibility and less independence.[1]

For a list of what she sells see Warsong Gulch items.

This section contains information that needs to be cleaned up. Reason: Cost.

May the blessings of the night be yours, friend! I am Illiyana Moonblaze, and I am the main supplier for the Silverwing Sentinels here in Ashenvale. As you improve your standing with the Sentinels, I will make available to you a fine selection of goods that you can use inside Warsong Gulch. Should you find yourself in need of item repair, I also provide those services.

What goods have I earned the right to purchase for use in Warsong Gulch?