Imp mothers are a type of demon loyal to the Burning Legion. First seen during the third invasion of the Burning Legion, very little is currently known about them, but their stomachs are known to operate as a kind of portal from which imps emerge.[1][2] 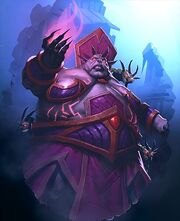 Imp mothers are massive, bulbous demons that seem to be exclusively female. As is common with demons, they have wings, hooves, and horns. Their method of locomotion is restrained to using their wings to fly. Imp Mothers are often found floating in pools of fel-lava.

Due to their limited physical capabilities, imp mothers typically use magic in combat. While they have typically been observed using fel-fire, some use disease and poison spells as well.[3]

Their true power lies in their power of manipulation. Imp mothers can shapeshift into other forms,[4] charm their enemies, and turn them against each other.[5] At least one imp mother, Agatha, showed enough power and authority to command the sayaad in their mission to tear apart the Kirin Tor from within. 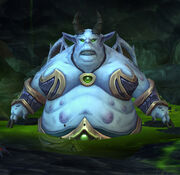 An imp mother in World of Warcraft.