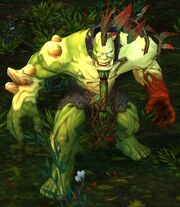 A regular infested orc, closer in appearance to an orc than the more heavily infested brutes.

The infested[1] are fleshy beings that have been infested by the botani and subsequently transformed into plant-like forms. The species most frequently infested by the botani are the orcs. The early stages of mutation allow the infested humanoid to retain their former appearance, but the specimen will have significant markings of the transformation. Later stages show a significant deformation of the living organism, turning it into a plant-like, muscular zombie obedient to its Primal masters.

The botani have long cultivated unique plantlife in their irrigated ponds or tree dwellings, but far more terrifying is their ability to cultivate flora within a living host. Unwary natives are captured and seeded in an agonizing process that alters their physical makeup and takes complete control over their bodies, turning them into mindless walking saplings. The entire process is poorly understood, but these grisly infested can be seen guarding botani enclaves or shambling ahead of the botani host as gruesome cannon fodder whose corpses eventually seed new terrain.[2]

The infested appear to be mere husks animated by plant life. They are slow but very strong. Slaying even one is a strong demonstration of skill.[3]

Due to the risk of having corpses be raised and infested by the botani, the Laughing Skull Orcs burn their dead.[4]

Some infested orcs are much larger and more heavily mutated than others, as such they may actually be some form of plant dire orcs as they have similar traits.