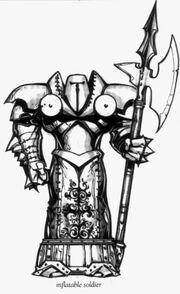 An enterprising merchant making regular guns along the dangerous trade routes between Nighthaven and Theramore commissioned the creation of the inflatable soldier. Made of shappe's bladders with an outer covering of mercenary garb, inflatable soldiers make overnight camps appear better guarded than they truly are. As they gain popularity among merchants to poor or too cheap to hire full escorts, inflatable soldiers are of increasing realism (with facial features, chain shirts, and tin helms) are becoming available, as are models appearing to be members of varying humanoid races. Unfortunately, due to their more complex stitching, the more realistic models are more likely to spring a leak when being repacked into the small kegs that make up their bases.[1]