Instructor Chillheart is the first boss in Scholomance. She can be found in the Reliquary.

Course: Introduction to the Dark Arts

Instructor Chillheart journeyed from Northrend to teach aspiring necromancers discipline, harshly punishing those who disappoint her. She commands the icy chill of the north and masterfully uses Scholomance's libraries to deadly effect.

When Instructor Chillheart's physical body dies, the foul magic that animated her escapes back to her phylactery.

Fragments of Instructor Chillheart's soul escape the phylactery and animate the tomes of magic scattered throughout the classroom.

Don't worry about clearing the room unless XP is desired - as starting the fight will kill all of the humanoid mobs. The Risen Guards should be killed, though, as they will survive the initial blast.

A deadly wave of ice begins to sweep the room!

The ice spreads from the east end of the room, bringing instant death for players who touch it. The wall moves at a pace that gives players roughly two minutes to kill the lich and move the encounter to phase two. Ice does appear on the stairs and the area under the stairs, so escape is not an option. The stair-side ice does not hit as hard as the main ice wall, so if time is about to run out, move the party into the western ice on or under the stairs.

The instant the lich dies, the ice wall fades and her soul moves to her phylactery:

Instructor Chillheart's soul escapes to her phylactery. Destroy it!

Several untargetable books appear in the room, moving about randomly. The fire books move in fixed looping paths, so look for a path and stay out of it. The arcane books move about randomly and also follow players—move out of explosion before it reaches the ground. The shadow books are stationary, but attack all targets in the room with shadow bolts.

Quickly burn down the phylactery—it has no attacks of its own—to complete the encounter before the books wear out the healer. There is no need for a tank in the second phase, so he or she should shift to DPS mode to help kill the phylactery.

Intro
Instructor Chillheart yells: Class is now in session.
Talking Skull says: Here we go. Do try to keep yourselves alive until the end.
Talking Skull yells: We're coming for you. Chillheart! Time for payback!

Escaping into her phylactery
I can never die!

Defeated
THIS CANNOT BE!
The Talking Skull cackles gleefully as the instructor's soul is destroyed. 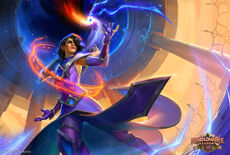 Instructor Chillheart's living form, here named Instructor Fireheart, appears as a legendary Shaman card in the Scholomance Academy expansion for Hearthstone. Her flavor text reads: "When you have fire in your heart, even death can't stop you."