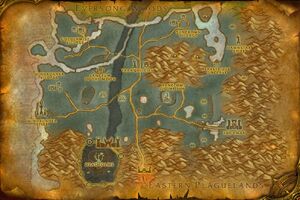 [Night Elf Plans: Scrying on the Sin'dorei], and return them to Dame Auriferous at Tranquillien in the Ghostlands.

Now, the more direct course of action that we are going to take, to figure out what these night elves are really up to, is to have you go to their island and steal any information that you can come by.

I want you to head west down the road out of town to Shalandis Isle, just off the coast. Go there and recover any plans they might have on the island or on their ship.

How fare our efforts to uncover the night elf plot on Shalandis Isle, <class>?

Troubling! These plans show the night elf forces at An'daroth, which we already knew, but also at An'owyn, a more remote ley-line nexus to the southeast.

There is a third nexus to the east, which is not mentioned, named An'telas. I have a very bad feeling about all of this, <class>.