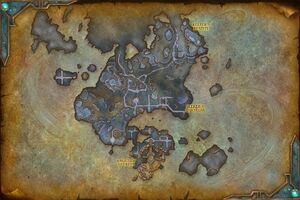 Recover the Primus's Sigil within the vault of Korthia.

The destruction here is... overwhelming.

Anima flows into what remains of the vault. We should now be able to enter.

Once inside, I will work on recovering the Primus's sigil.

Please show reverence within the vault. It is a sacred place that few are allowed to see.

Even the prophecies did not foretell that a living mortal would gaze upon the secrets within.

The Primus's sigil! Hmm... I sense a familiar magic upon it.

Yes. All those things I saw through your eyes in Torghast...

We are close to seeing the secrets of Korthia.

I am ready. Let's open the way.

Tal-Galan says: My friends! Let us begin the ritual.
The three attendants open a portal.
Tal-Galan says: The way is open! Come, Maw Walker.
Tal-Galan and Heirmir jump into the portal while Kah-Rev and the two keepers head the other way out of the building.
Protector Kah-Rev says: We should go. This is no place to linger.

Jump in to the portal to enter the Chamber of the Sigil:

Take down one, but both must die before either will be defeated:

Xalvez the Collector yells: The bonds of shared torment empower us!

Take down the other:

Xalvez the Collector says: Is this... the end?
Tal-Galan says: There is one last record here. It appears to be bound together with the sigil.
Another image of the Primus appears.
The Primus says: ...enough to keep it protected. Another safeguard is required.
The Primus says: I will bind it with another form of magic. One that even Zovaal cannot--
The image disappears and the Sigil of the Primus appears in its place.
Tal-Galan says: That is all that remains of the message. Take the sigil, Maw Walker.

Interact with the Sigil of the Primus:

Bonesmith Heirmir says: I don't recognize the magic bound with the sigil. Perhaps Highlord Fordragon will know of it.
Tal-Galan says: So much knowledge. We cannot leave it behind!
Bonesmith Heirmir says: The sigil is more important. Get us out of here!
Tal-Galan says: Very well. I can open the way back to Keeper's Respite. I pray I can return one day...
He opens a portal, and he and Heirmir leave through it.

Take Tal-Galan's Portal back to Keeper's Respite and turn in to Bolvar.