Introductions Are in Order

For the Ember Court quest, see

[60] Introductions are in Order.

Introductions Are in Order
Level: 1-20 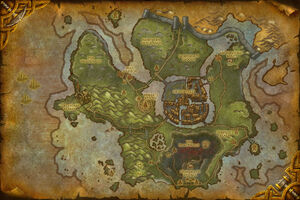 The Forsaken are right on our heels and now these ogres are trying to flank us, <name>.

They're servants of the ettin Koroth -- the meanest, most destructive force in all of Gilneas.

If we can bait Koroth into charging the Forsaken's forward force, we should be able to cover our retreat and buy some time.

The only way this can work is if we make Koroth furious. It won't be enough to just kill his minions. We need to swipe his most prized possession, a tiger-skinned banner.

You definitely got the ettin angry, <name>. I heard him myself.

Head up the hill behind the carriage and kill ogres along the way. The Hillbreaker is up near the top, behind his banner. Snag the banner at [46.8, 83.2]

On looting the banner:

Prince Liam Greymane says: Just in time, <name>. Here come the Forsaken.
Liam runs forward and plants the banner.
Prince Liam Greymane yells: You will come no further, Forsaken scum! By the war banner of the ancient Greymane clan, I expel you from our ancestral lands!
A squad of Forsaken come down the path and take the banner.
Captain Asther yells: Worthless mongrel. I will order our outhouses cleaned with this rag you call a banner.
Koroth appears and attacks the Forsaken!
Koroth the Hillbreaker yells: Corpse-men take Koroth's banner! Corpse-men get smashed to bitses!!!