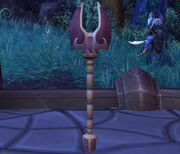 Exarch Akama is too cautious, but we shouldn't ignore a threat from the Shadowmoon clan. It is good you are here!

Since we arrived on Draenor I have dedicated myself to recreating the technology we left behind. This large structure here is a defense ward. It should counter a Shadowmoon advance - provided we power it up.

I have prepared resonance crystals at my workshop to the south. Carry one crystal at a time to the three pylons that surround the ward, then activate the control panel nearby!

Exarch Hataaru says: This way, friend. The ward is nearly at full power.
Hataaru leads you to the area outside his workshop.
Exarch Hataaru says: We will sink these crystalline resonance emitters into the earth, harnessing the very energies of Draenor itself to power our defenses.

<The console thrums with energy. You can't interpret anything on the display, by some of the lights are still blinking needily.>

Pick up a Charged Resonance Crystal next to Hataaru's new position, then run it over to one of the three small pylons around the big crystal.

Repeat for the second and third pylons. After the third:

Exarch Hataaru says: It is ready! Go inside and power on the console while I observe...

The console thrums with energy and lights up as you draw near, as though sensing your presence. Simply touching the main panel brings the defense crystal to life outside.

If this is the kind of technology Hataaru was able to cobble together from spare parts, you can only imagine the splendor of the world he came from.