The Iron Maidens - Admiral Gar'an, Enforcer Sorka and Marak the Blooded - are the final boss of the Iron Assembly wing in the Blackrock Foundry.

With little opportunity to exercise her tactical brilliance under the ancient social structure of the orc clans, Gar’an was thrilled to be one of the first warriors to volunteer for naval duty under the Iron Horde. Instantly successful in battle, she was named Admiral of the Iron Horde fleet and selected Marak and Sorka as her lieutenants. Together, they are called the Iron Maidens, and have crushed any who have dared face them.

The Iron Maidens continuously gain Iron Fury, progressively unlocking new abilities. Periodically, one of the Maidens moves to the Dreadnaught to bombard players with its cannon. A team of players must use loading chains to get to the deck of the boat, defeat the Deckhand stationed there, and sabotage the ammunition of the main cannon before it finishes Warming Up. When any one of the Maidens reaches 20% health, all three activate Iron Will for the remainder of the fight. 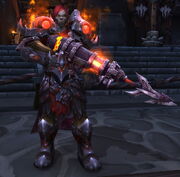 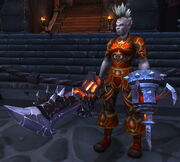 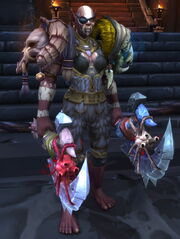 When one of the Maidens mans the Dreadnaught's main gun, a group of players must use the loading chains to travel to the Dreadnaught and defeat that Maiden's deckhand before the Maiden completes the warmup sequence of the main gun. While the gun is warming up, the main cannon will barrage the docks with bombs, which players who remain on the docks must avoid.

Blackhand yells: The Iron Maidens have fallen? They were my favorite! Find these invaders, and bring me their heads!