The Ironforge Airfield,[1] formerly known as the Airstrip[2] or the Dun Morogh airfield,[3] among other (unofficial) things, is an airfield located in a high mountain valley northeast of the dwarven capital city of Ironforge. It has two landing strips, and several gnome pilots are there standing next to their planes or tinkering with them. Around the airfield, there are a series of dwarven buildings and structures. Mountaineers from Ironforge patrol the area, and some members of the Stormpike Guard can be found here too. North of the airfield there is a gryphon roost, but it only connects to Gol'Bolar Quarry via a flying machine. Further north, near the Wetlands, there is a crashed gnome plane along with some bones.

Before patch 4.0.3a updated the world, this area was inaccessible except by careful mountain climbing and—while the WoW Atlas labeled it "Airstrip"—there was no in-game subzone name, leading to speculations about its purpose.

The Airfield is mentioned in all the repeatable Alliance quests (The Alliance Needs More ...) from the Ahn'Qiraj War Effort event. The quest objectives all state "Bring 20 Materials to NPC at the airfield in Dun Morogh."

However, all those NPCs can, in fact, be found in Ironforge and not at the airfield, and there is no mention of the airfield in the non-repeatable quests.

It can be supposed that the Ahn'Qiraj War Effort quests were originally planned to be at the airfield (Flying the goods over would make sense) but have been moved to Ironforge for unknown reasons.

The goblin Krizz revealed and foiled a plan of Dark Iron dwarves at the airfield. Krizz traveled there with Fala Fizzlesprocket atop Metzen the Reindeer, defeated the dwarves and rescued gnome prisoners who had been forced to create a gigantic robot resembling Greatfather Winter.

Thanks to Ambassador Slaghammer, the Dark Iron dwarves were able to attack the airfield through their mole machines, ambush the local guards and put the dwarven bombers to the torch. Led by General Grimaxe, the dwarves under the Twilight's Hammer will stop at nothing to see the land burn in the name of the Old Gods.

During the Burning Legion's invasion, Ironforge Airfield falls under the Legion's control. Its residents and, presumably, the flying machines have been killed or destroyed. The last defenders are led by Mountaineer Falmor.

South of the airfield there is a small area with three tanks. Some Gnomeregan Evacuees have found a way out of their irradiated city, a lone pet trainer offers her service to hunters, and some gnomes and dwarves are dancing in the snow. Here is a big tower with a sealed entrance to a tunnel which is similar to the tunnel in North Gate Pass. The tunnel continues back the same distance as the others located around Dun Morogh, at an upward incline. When it reaches its peak, it drops off into midair. If enough distance from this jump point can be gained then it is possible to land in the Deeprun Tram of Ironforge. However, no other player-characters have been observed via this method, although NPCs are present. In addition, the portal between the Tram and Tinkertown does not function when reached via this method, and instead players pass straight through without pause.

In the same valley, there exists a frozen lake to the south of the airstrip. Since the Cataclysm, the entire lake is the site of an ongoing battle between Ironforge dwarves and Dark Iron forces led by General Grimaxe.

Before the Cataclysm the southern end of the lake had a cave of Frostmane trolls that skirmished with Ironforge dwarves on the lake itself. The cave itself—and apparently the trolls—was destroyed.

There is also a black bear mother watching over her offspring northwest of the gryphon roost just by a waterfall. By walking around the mountain over Ironforge, a camp with two members of the Seasoned Coldmine Explorers (members of the Stormpike Guard), a cave occupied by Frostmane Trolls, and an empty dwarven camp can be reached. 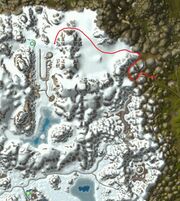 Airfield region, with hiking route in red, and flight points in yellow.

[10] Get to the Airfield. This quest becomes available after completing the quests

Horde characters without flying mounts can still get to the Airfield by walking a difficult unmarked path that begins at the North Gate Pass end of Loch Modan. This route—which is climbable, albeit with some careful jumping—has existed since the game's launch.