The Ironforge Guard[1] (also known as the King's Army)[2][3] are the main domestic military force of the Kingdom of Ironforge. Through this role, they act variously as city guards within the capital of Ironforge, elite bodyguards of the monarch, and a peacekeeping force within the wider Dun Morogh region.

Each member of the guard is equipped with a set of plate armor, a specific attire with an iconic red color and the symbol of a hammer. Under Ironforge's government, Angus Stonehammer serves as captain of the guard.[4] While the main responsibility of the Ironforge Guard appears to lie within the kingdom, members may serve in the armed forces fighting on distant battlefields as part of the Alliance military.[5] Members have also been known to accompany important figures to distant locations in their role.[6]

The Ironforge Guard have historically been involved in resisting any attack on the city by enemy forces, Horde or otherwise. During the Elemental Unrest, when frenzied elementals threatened major cities across Azeroth, the guard helped successfully defend Ironforge from the assault.

Shortly before the Cataclysm, the estranged Princess of Ironforge Moira Thaurissan would return to the city and attempt to seize power, throwing Ironforge into chaos. At this time, the guards were vital in maintaining peace between Moira's Dark Iron clan and the Ironforge dwarves themselves. These events very nearly led to another civil war among the dwarven clans. During these events, a guard was also sent to locate Kurdran Wildhammer and bring him to the rest of the Council of Three Hammers, then guarding the trio when dealing with the Hammer of the High King.[7]

The Ironforge Guard was used to arrest the Dark Iron Ambassador Slaghammer in the Dark Iron Embassy when it was discovered he was colluding with the Twilight's Hammer.[8]

Later, during the Siege of Orgrimmar, a group of guards accompanied Queen-Regent Moira Thaurissan as she pushed through the Underhold. After arriving by Dark Iron Mole Machines, they would suffer heavy casualties to the True Horde's iron stars.

In the early stages of the Burning Legion's third invasion of Azeroth, the Ironforge Guard were deployed throughout Dun Morogh to defend against the Legion Invasions. Alongside other Alliance forces, they were successful in protecting the region. 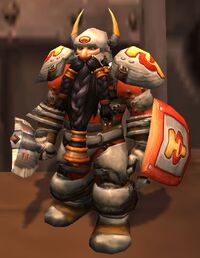 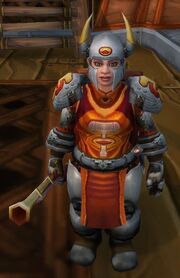