Isiset, Construct of Magic, is a boss of the Halls of Origination in World of Warcraft: Cataclysm.

Isiset along with the other constructs were created to protect the powerful device capable of resetting all life on Azeroth. Her sphere of influence is magic.

In the early stages of the Fourth War, High Commander Kamses confirmed that Rajh and the other keepers were dead.[1] After N'Zoth was freed from its prison, and the Black Empire invaded Uldum, a Void-corrupted version of Isiset could be briefly seen in the Old God's vision of the Halls.

Isiset serves to regulate the arcane energies contained within, and produced by, the Halls of Origination. Legend has it that this construct has become enraptured with her own arcane mastery and the perfection with which it seemingly endows her.

Aggro
Gaze to the heavens! What do you see?

Supernova
Bask in my radiance! 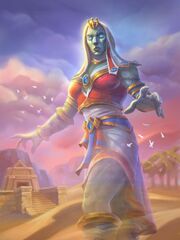 A Conjured Mirage of Isiset in Hearthstone.

Isiset appears as one of the bosses that can be encountered in the Tombs of Terror adventure in the Saviors of Uldum expansion for Hearthstone.

The Conjured Mirage, a rare collectible card from the same expansion, depicts a projection of Isiset. The mirage's flavor text reads: "What you see is Isiset."