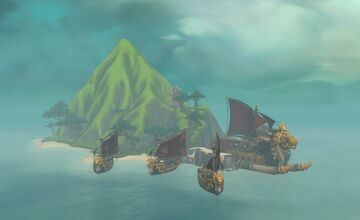 The Isle of Fangs

The Isle of Fangs is a small island off the southern coast of Zuldazar in the Bay of Kings. It's the southernmost point of Zandalar. Like Tusk Isle just to the north, the Isle of Fangs is used as a port and outpost by the Zandalari Empire, with part of the Golden Fleet being moored here. The island also has its own watch tower which can be used to send signals across the bay.

The Isle of Fangs is the farthest out of the various ports in the Bay of Kings that have been the historic home of the Zandalari Golden Fleet. A large portion of the fleeting, including one of its most powerful ships known as the Breath of Pa'ku, was stationed here at the time of the war in Zandalar. Eventually, mutineers loyal to Prophet Zul would seize control of the fleet as it sat in harbor, though the battleships were soon reclaimed by Zandalari and Horde forces. After this victory against the traitors and their mogu allies was complete, the final loa-blessed signal flame was lit on the Isle of Fangs' watchtower, decisively marking the success as complete.[1]

Later, as part of their war campaign on Zandalar, Alliance forces would infiltrate the Isle of Fangs and the ships docked there. These agents recovered important military information from the Breath of Pa'ku before secretly sabotaging the hull of each ship with special explosives.[2][3] The act of mining these battleships was then repeated on Tusk Isle and at Warport Rastari, in preparation for impending attack on Dazar'alor itself.

[120] Under the Cover of Swiftwing