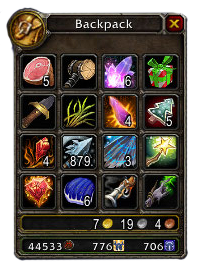 An item is something that a World of Warcraft player character can carry, either in their inventory, represented by an inventory icon, or tracked on a page in the character sheet. An item is a conceptual object in the player's head, not an object in the game world, although an item may also have an object associated with it. For example, clothing gear items are equipped, clothing gear objects appear on the character. When a guardian pet item is used, a guardian pet is spawned in the game world, much like summoning.

A character can purchase items from vendors, can receive items as rewards for quests, and can loot items from many objects, such as corpses of kills. Most items can be sold to vendors. Depending on how an item binds, it may be able to be bought and sold in the auction house, or mailed to another character.

Items are interacted with, equipped, used, bought, or sold, by right clicking the icon in the correct venue. Right clicking will have different, perhaps unexpected results depending on the venue; attempting to equip an item when you are talking to a vendor will sell the item to the vendor. (You can buy it back if you notice it.) A few items have passive abilities and only need to be carried.

There is a trend to make some items teach a character how to summon, rather than spawning objects directly, so that the item does not continually consume inventory space. Companions and mounts are no longer spawned from items, now the pet or mount item teaches the character to summon the pet or mount.

Container items can contain other items or may represent a conceptual game item that has no representation of its own.

Items are divided into several categories, based on their rarity and usefulness: see Quality.

Legendary Heroes can carry up to six special items in a small inventory. The items can turn the tide of battle as they grant the Hero the ability to cast offensive and defensive spells, heal units, utilize special abilities or gain bonuses to specific statistics.