Ivus the Forest Lord is a massive Ancient of War that aids the Alliance in Alterac Valley. 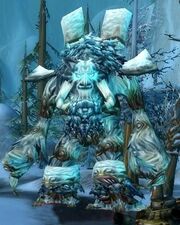 Ivus is brought into battle by turning in 200 Storm Crystals to Arch Druid Renferal, who will then summon Ivus at the Field of Strife. He will then will patrol around the field for ten minutes, before pushing into the Frostwolf base. Ivus is more powerful if everyone on your team buffs Ivus as he accepts every buff. Ivus doesn't attack enemy NPCs, and will only attack enemy players. If Ivus reaches the Frostwolf base, he will stand in front of Frostwolf Keep and stay there unless provoked by enemy players, in which case he will give chase until he either leashes back, kills the enemy player, or is killed himself.

Ivus is a very powerful NPC, but is not invincible. Without Alliance interference, he can be killed by the enemy Horde forces with relative ease. Ivus, like his counterpart Lokholar the Ice Lord can also be kited, but as he is neither attacked nor defended by NPCs on the field, and often delays their eventual movement forward.

Ivus is prone to a bug in summoning where he will fail to spawn and the Calling Circle will disappear. It is unknown what causes this to happen. (As of 11/17/08, this bug still seems to persist.)

Due to the preferred method of rushing to the enemy base and taking out objectives along the way for the most efficient win, and the time consuming gathering of the Storm Crystals, it is extremely rare to ever see Ivus now. Many newer players have no idea this NPC even exists. However, there are players who have successfully summoned him, even if only for the experience of seeing Ivus at least once.