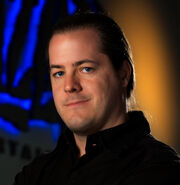 J. Allen Brack is the president of Blizzard Entertainment.[1] He was originally the Executive Producer and Vice President for World of Warcraft.[2][3]

As the executive producer on World of Warcraft, J. Allen Brack is responsible for coordinating the efforts of the game’s development team as it creates new content to keep the experience fresh and exciting. This involves overseeing all aspects of the project and managing the production of patches and expansions from initial conception through release.

Brack started at Blizzard Entertainment in January 2006 as a senior producer in charge of content, playing a major role in the creation of new zones, dungeons, and quests for World of Warcraft’s first expansion pack, The Burning Crusade. Prior to joining Blizzard, he worked at Origin Systems, Inc. on the Wing Commander franchise and then at Sony Online Entertainment LLC on Star Wars Galaxies.

On October 3, 2018, Activision Blizzard announced Brack as the new president of Blizzard Entertainment succeeding Mike Morhaime, who would remain a strategic advisor to the company for a period of time.[1][9]