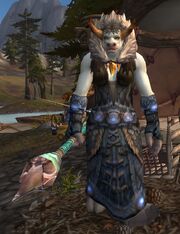 Jale Rivermane is the chieftain of the Rivermane tribe, one of the four tribes of the Highmountain tauren. While she is an elderly woman, she is still a powerful shaman skilled in the arts of restorative water magic.

When the Burning Legion returned to Azeroth, Spiritwalker Ebonhorn called a meeting between the leaders of the tauren tribes — Ulan Highmountain, Jale Rivermane, Lasan Skyhorn and Torok Bloodtotem — as well as the Underking of the drogbar, Dargrul. As Ebonhorn began describing a vision that the spirits had given him, Dargrul interrupted him by asking if the tauren were planning on actually using their ancient artifact, the

[Hammer of Khaz'goroth]. This caused Jale to ask if there was no end to the drogbar's disrespect, with Torok saying that there better be "or there will be".

Like Torok, Lasan and Dargrul, Jale was shocked at Ebonhorn's revelation that according to the spirits, the power of the hammer would be wielded against the Legion by an outsider rather than a native of Highmountain, but she nonetheless agreed to obey the spirits at High Chieftain Ulan's command. After Dargrul stole the hammer and used it to kill Ulan, Jale told Ulan's daughter, Mayla, that the Rivermane tribe could not spare anyone to hunt him down. As the drogbar would use the hammer against the tauren villages, the chieftains had to defend their own lands from the assault, and so Jale was forced to depart from Thunder Totem along with Torok and Lasan.[1]

When the adventurer arrives in Thunder Totem to aid the inhabitants of Highmountain, Jale and the Rivermane at Earthmother's Bounty are the first tribe that Mayla sends them to assist. After helping Farmer Maya fend off the drogbar forces of Ormgul the Pestilent, the adventurer and Jale journey further south to aid the fishermen of Whitewater Wash. Once this area has been secured as well, the champion and the Rivermane chieftain travel to the sacred Lifespring Cavern, a place where the Rivermane practice much of their restorative water magic but which has come under attack from drogbar defilers under the command of a stonecaster named Gelmogg. Together, Jale, the hero and a group of Rivermane tauren succeed in killing Gelmogg — even after he is transformed into a monstrosity by Dargrul, who also briefly mentions heading to Riverbend before disappearing again. In response, Jale hurries to Riverbend — which is her home village and the place where the Rivermane's winter supplies are stored — and is seemingly relieved when it appears that she and the hero made it there before Dargrul's arrival. However, the adventurer only barely manages to evacuate most of the villagers and send them to Spiritwalker Ebonhorn before the Underking appears and lays waste to the village with the Hammer of Khaz'goroth. After participating a failed attempt by Warbrave Oro to kill Dargrul while he is in the Bitestone Enclave, the hero finally escorts Jale to the safety of the Hall of Chieftains in Thunder Totem.

Jale and her Rivermane shaman later participate in the battle against Dargrul's forces at Snowblind Mesa.

Jale Rivermane was one of the Highmountain tauren that traveled to Highmountain Summit in order to thwart the Necrodark's ritual to incarnate Uul'gyneth.[2]

Though some of the other Highmountain look down on us for our peaceful way of life, we provide them with most of their food and heal the wounds of battle.

Those calves need to show some respect for their elders.

The Rivermane are not a warlike tribe, but this trespass of our sacred cavern will not go unpunished. The drogbar will know the power of water magic.

With age comes wisdom, and with wisdom comes power!