"Welcome to de great show, friends. Just wait 'til ya see what I got in store for ya."

Jin'do was a Gurubashi jungle troll witch doctor of considerable power. Jin'do the Hexxer was responsible for brainwashing the Zandalari priests Jeklik, Venoxis, Mar'li, Thekal and Arlokk into the service of Hakkar, the Loa of Blood. He was initially killed during the first battle against the Hakkari trolls of Zul'Gurub. His spirit later returned, stole the powers of Hakkar and attempted to bring power back to the Gurubashi, enlisting the aid of Zanzil the Outcast. Despite his newfound power, he was defeated and slain once again.

Jin'do was an optional boss in the classic Zul'Gurub raid, and the final boss of the revised Zul'Gurub. 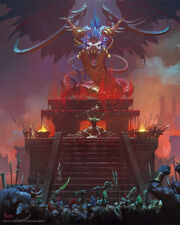 Jin'do the Hexxer was a troll witch doctor inside Zul'Gurub and the leader of the Hakkari.[1] It was in Zul'Gurub that Jin'do the Hexxer enslaved several high priests of the Gurubashi to aid him in summoning their dread god, Hakkar the Soulflayer, into Azeroth. The presence of the Soulflayer presented a grave threat to the world, and, before Hakkar and his priests could dominate the continent, they were thwarted by the dedicated effort of heroes mobilized from the four corners of Azeroth. Jin'do was slain in the conflict, but his restless spirit burned with shame at his failure, and it drifted in the spirit world, seeking a way to return.[2]

Main article: Shade of the Hexxer

When Jin'do was defeated in Zul'Gurub, he survived as a weak and broken shade in the spirit world. But Jin'do always had power over spirits. One by one he broke them to his will, and with each soul devoured he grew closer to ripping a hole through to the living world.[3] Several years after the defeat of Hakkar in Zul'Gurub the Shade of the Hexxer attempted to revive the forces of Zul'Gurub.

[29] Be Raptor the player controls Ohgan'aka and attempts to escape from Zul'Gurub, only to be confronted by Jin'do near the exit. After Jin'do explains his plans in great detail before allowing the hero to escape; it is revealed that he is trying to summon Hakkar and needs Bloodlord Mandokir, who needs Ohgan'aka, for this task. He threatens to destroy you but instead evicts you from Ohgan'aka's body and challenges you to come back at a later time.

[31] Backdoor Dealings, players observe a conversation between Jin'do and Zanzil the Outcast. Jin'do had recovered the bodies of High Priestess Jeklik and High Priest Venoxis and, knowing Zanzil's talent for raising the dead, came to him for help resurrecting them. Though agents of the Zandalar Tribe attempted to stop both rituals, they were only successful in destroying Jeklik's body and Venoxis was successfully restored to life.

The Zandalar tribe led by a mysterious prophet Zul called representatives from all tribes for a meeting in Zandalar. The prophet stated that troll civilization is nearing extinction and calls for war and unity of the troll race, with the intention of forging a new empire. Jin'do and his followers gladly accepted the offer.

Later in Zul'Gurub Jin'do, now styled Godbreaker, is wrestling Hakkar into submission, holding him by spirit chains, stripping out his power into himself. The only way to stop the invincible Jin'do now is to release the captive upon the captor.[4] Upon destroying the spiritual chains holding the Soulflayer in place, Hakkar turns upon Jin'do, and utterly destroys him, leaving only the corpse of Jin'do the Broken. Hakkar then returns the adventurers to the mortal realm, promising to deal with them another time, before vanishing.