Jubeka Shadowbreaker is a powerful undead master warlock trainer, member of the Council of the Black Harvest.

Jubeka watches over the eternally banished Kanrethad in Shadowmoon Valley.

After convening with her fellow warlocks on the Council, Jubeka was partnered with Kanrethad Ebonlocke to return to Outland.[1]

Immediately afterwards, Kanrethad departed alone for the dusty wasteland of Shadowmoon Valley. She didn't care very much about the Council executing her for returning alone, she believed that as long as her grimoires lasted, so would her legacy.

For two weeks, her research continued as drudgingly expected. She noted that the fel imps of Felspark Ravine in Hellfire Peninsula were remarkably chatty, that they were just as easy to contract into service as their names were to learn, and that the ritual to summon one was trivial, at best. Voidlords were rather difficult to stumble across, but it took very little persuading to convince one to divulge the name of a rival lord.

Twenty-one days after their arrival on Outland, Kanrethad returned, looking incredibly grim. Jubeka was ready to attempt for the first time the binding of a higher order member of the Burning Legion, but she dared not attempt the ritual alone. With the aid of Kanrethad, they summoned a Shivarra, but she broke free almost instantly after the completion of the summoning ritual. In the instant that the Shivarra's razor-sharp blades sliced through the air, Kanrethad's form shifted and the blades bounced as if striking stone. Unlike the typical form of metamorphosis, he had not yet completed his demonic transformation.

While examining the Ruins of Farahlon in Netherstorm, she was ambushed by a race of floating eyeball squids calling themselves observers. Unexpectedly intelligent, they expressed a deep desire to bear witness to all forms of magic and willingly offered their services in exchange for the opportunity to consume new forms of magic. After having spent weeks trying to understand how to summon one of these demons, she noted in her journal that the ritual to summon an observer was unexpectedly complex. While natives of the Great Dark Beyond, they were highly migratory and the summoning ritual needs to compensate for their travels: without their willing assistance, summoning an observer would be nearly impossible.

Jubeka noted in her journal that the key to binding a Wrathguard was ironically reducing the number of runic symbols used in the summoning circle, and that they were highly resistant to charms and compulsions, but readily responded to basic expressions of strength. Kanrethad was unexpectedly insightful into the conditioning that the Legion uses to compel the wrathguard into action. His ability to express his dominance over lesser demons was remarkable, if short-lived. With great pain, she had been able to inscribe the forms he used to summon multiple demonic servants at once. Unfortunately, while he could bind two lesser demons indefinitely, Jubeka could only do so for a short time.

Traveling to Blade's Edge Mountains, they left a few ogre corpses in their wake. Studying the ritual circle of Vim'gol revealed additional ways of bolstering their power using demonic sacrifices. While the act greatly enraged their demonic servants, fusing their life energy to their own provided a dramatic increase in power. With a little experimentation, she discovered that the more closely linked you are with the demon you sacrifice, the greater the power of the ritual. She noticed that Kanrethad's ability to restrain his demonic transformation seemed to have reached a plateau. Once again, his lack of power disgusted her: things that would be trivial to most warlocks took him an eternity.

There, Kanrethad forcefully interrogated a Doomguard. He wanted to know why his kind was drawn to sacrificial magic. Using force, he learned that before Sargeras freed them, they were the Titan's hounds, forever enslaved to police the use of arcane magics. Indeed, sacrificial magic was considered the greatest violation of life and they were attuned to instantly punish those who delved into such sorcery.

At Kanrethad's insistence, they headed for the Altar of Damnation in Shadowmoon Valley. He seemed to be convinced that there was more to the Hand of Gul'dan than just a show of power. Jubeka was not convinced, but at this point her Grimoires were complete. She did not understand Kanrethad's obsession with controlling the flow of demonic power granted by his transformation. While he played around with ancient altars, she intended to try her hand at opening a gateway to conjure many wild imps at once.

Finally, she found out that Kanrethad was up to something, and that to say she was concerned about their next move was a dramatic understatement. She was convinced there was no chance that they would return from this next adventure alive. As a measure of prevention, she contracted the imps to leave four fragments of her soulstone at the locations listed in her journal. By bringing the four fragments together and finding her body, the reader of the journal would be able to resurrect her and bring her grimoires back to Azeroth.

Her journal was thus returned to Azeroth by her imps and given to trustworthy souls, who then passed it on to a warlock who sought to unlock

[The Codex of Xerrath]. Her soulstone, shattered into four parts, was left in the lands she visited: Hellfire Peninsula, Netherstorm, the Blade's Edge Mountains, and Shadowmoon Valley.

Her journal indicated her growing concern - and suspicion - of Kanrethad's intentions. At the Altar of Damnation in Shadowmoon, she accused him of not only trying to control more powerful demons but to essentially become one himself. Kanrethad confirmed this and told her that the reason he had chosen her as his associate was so that if he failed, she was to banish him forever. She agreed, and accompanied him inside the Black Temple where they discovered how Illidan Stormrage had been able to steal demons from Burning Legion and control them: he would let them drink from an untapped store of raw arcane energy with powers similar to the original Well of Eternity on Azeroth in exchange for their service.

The warlock who followed her trail found the four fragments of Jubeka's soulstone, and fused them together. However, no soul was stored within the stone. Instead, the stone seemed to be drawing power from somewhere in Shadowmoon Valley, beyond the mountains, from the very gates of the Black Temple. He then found a way inside and confronted Kanrethad, fully transformed into a demon, at the summit of the Temple. After Kanrethad's defeat, Jubeka fulfilled the promise she had made to banish Kanrethad, but she had to stand guard over him at the Altar of Damnation for eternity, or Kanrethad would break free. 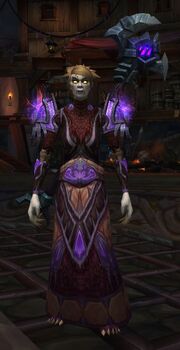 Jubeka at the Circle of Wills in Dalaran.

After the Battle for the Broken Shore, Jubeka and the rest of the Council of the Black Harvest sought out a powerful warlock to take place as the Sixth member of the Council, having since lost Kanrethad. They met in the sewers of Dalaran to open a portal into the deepest parts of the Twisting Nether and bind a powerful demon to their will in order to grow stronger against the Burning Legion.[2] Things went wrong as the powerful demon they managed to summon, Jagganoth, overwhelmed the Council, killed Zelifrax Wobblepox, and took the others captive on his personal world, Dreadscar Rift.

Jubeka, chained to a pillar, was eventually freed by the Sixth of the Black Harvest alongside the other members but Ritssyn Flamescowl, who had succumbed from his wounds. Together, they infiltrated the archives of Jagganoth and stole the Tome of Blighted Implements. Unfortunately, they were discovered; Jagganoth, burning with rage, attacked them and knocked all the members of the Council to the ground, except for the Sixth who had managed to flee and return to Dalaran with Calydus, a demon that joined their cause.[3]

Jubeka and the others were thus sent to the dreadlord Mephistroth on the world of Niskara. The Sixth, having since been named First of the Council of the Black Harvest, came for them and saved them once more. They returned to Dreadscar Rift, their newly conquered world and base of operations against the Burning Legion.[4]

Jubeka participated in the summoning and binding of the Eredar Twins to the Council's will.

Jubeka was steadfast in keeping Kanrethad banished until Jagganoth took her prisoner. Kanrethad's fate has since become unknown, which troubles Jubeka until one day when she feels his presence in Azsuna.[5] Jubeka imprisons a member of the Cult of the Green Flame, a group of fanatics in Faronaar lured by Kanrethad's power and seeking to be near him at any cost to share in it,[6] who reveals to her that the cult is harnessing energy to break Kanrethad out of his banishment. Jubeka asks the Netherlord to steal the crystals the cult is planning to use to empower the ritual.[7] At the cult's portal Kanrethad calls out to Jubeka from the other side, telling her not to let the Legion take him for he could not endure such a fate. It is then that Jubeka realizes that some of her friend remains in the demon he has become.[6]

At the Broken Shore, Kanrethad's twisted followers begin their ritual and the Black Harvest moves to intervene. Using the stolen fel crystals from earlier, the fel energy consuming Kanrethad is siphoned and he turns back into a human. Jubeka thanks the Netherlord, for the burden of guilt has been lifted from her shoulders and she never thought Kanrethad would be returned to them.[8] She gathers the crystals used to absorb Kanrethad's fel energies, for if any were to break then the energy would go right back into him, and returns to Dreadscar Rift with the council and recovering Kanrethad.[9]

Kanrethad's power is too great to allow him to be free. I'll ensure he stays banished, for as long as I exist.

Still, a taste of the fel energies he is saturated with should cause no ill. Feel free to drain some for your own use. Should you ever grow tired of its effects, I can purge the fel energy from you, for a price.

Jubeka, I no longer wish to be tainted by this fel energy.

She may be related to Grayson Shadowbreaker.