For the island name that would eventually become the night elf world tree, see Teldrassil#Kalidar.

Overview of the Kalidar battleground. 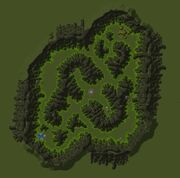 Kalidar was a planned battleground for the original World of Warcraft that never made it to live. It had a Warcraft III multiplayer and/or MOBA-style design, with three separate lanes in a forested area with a coloration similar to the Felwood seen in A Destiny of Flame and Sorrow.

The battleground contained a human barracks and an orcish stronghold on each side. Separating them were three main paths, with other neutral buildings spread throughout the area: a scout tower in its center, a goblin laboratory close to the tower, three mine entrances (one in each path), two small moonwells, and several forest troll huts.