Kaylaan is a draenei quest giver located at Tuluman's Landing in the Netherstorm. While fighting Socrethar at Socrethar's Seat on the Aldor side players will face Kaylaan the Lost, as a mob, the same character turned evil after leaving the Aldor. 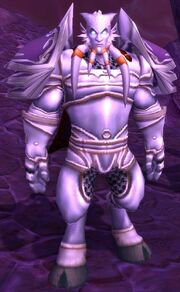 Kaylaan before joining the Burning Legion.

Kaylaan is a former Aldor Draenei Paladin that was faithful to the Aldor. You can watch him attempt to resurrect a fallen comrade but fails, claiming the Light has forsaken him. He joined Socrethar, a leader of a group of Eredar among the Burning Legion to fight the Scryers and their leader Voren'thal the Seer, who killed Kaylaan's brother.

He also seeks revenge against the Sha'tar for allowing such people inside Shattrath City, and the Aldor for "blindly" accepting every decision of the Naaru. When the Aldor forces attacked Socrethar, he was called upon to eliminate the Aldor. However, Ishanah appeared telling Socrethar to take her instead of Kaylaan. Socrethar immediately killed her. Upon seeing this, Kaylaan resurrected her only to be killed by Socrethar. The Aldor force avenged his death.

In a different time and place I would've been considered but a youngling. Here I am a seasoned combatant ready to live and die for the glory of the naaru.

Ten of us went into Manaforge Ara. All the others fell to the Legion.