Kelsey Steelspark is a gnome rogue. She is an agent and key member[1] of the Gnomeregan Covert Ops.

She is initially found as a rogue trainer in New Tinkertown. She is later found as a quest giver in Tanaris, where she is attempting to convince Marin Noggenfogger of Gadgetzan to enter a trade agreement with the gnomes rather than with the Bilgewater Cartel represented by Megs Dreadshredder.

While in Gadgetzan, she dresses in civilian guise and pretends to be stereotypically perky and cheerful in front of Megs, who is completely taken in by the act and believes that Kelsey is merely an airhead.[2] Out of sight at Land's End Beach however, she drops the charade and shows "how gnomes get things done around here".[3]

She is also found in the Hall of Shadows acting as the Uncrowned's quartermaster.

Following the Burning Legion's defeat, she is present in Staghelm Point in Silithus: The Wound where she directs adventurers to sabotage goblin mining operation.

Kelsey was, alongside the adventurer, assigned by Halford Wyrmbane to go to the Alliance's two bases in Zuldazar on Zandalar. While the adventurer traveled to the Castaway Encampment Kelsey went to Xibala. She later came to get the adventurer to help out at Xibala.[4] After everything was in order, Kelsey revealed that she had been following the Alliance adventurer's journey for a while and greatly admired them. She wanted to tag along with them; although Kelsey was not too good in a fight, nobody could beat her mechanical skill.[5] Kelsey is also a friend of Sapphronetta Flivvers, and asked the adventurer to investigate her disappearance.[6]

Kelsey was part of the Gnomeregan Covert Ops team working with Shandris Feathermoon and Halford Wyrmbane against the Reliquary in Vol'dun.

In Zuldazar, the forces led by Wyrmbane began an operation to weaken the Zandalari harbor's defenses. Kelsey and John J. Keeshan planted bombs on the Breath of Pa'ku, and in the process Keeshan and Kelsey bonded over a love of collecting knives.[7] Realizing one of the Zandalari ships had a route that would take it right by the Alliance's base in Xibala, the two of them hurried to warn Wyrmbane.[8] The ship that discovered them was Gral's Call, and Kelsey was part of the forces that boarded it to kill the crew before they reported to Zuldazar.[9] Once the captain was captured and crew killed, Keeshan and Kelsey rigged the ship to explode. Seeing Kelsey's excitement at that part of the plan, Keeshan wished to speak to her later about their shared interests.[10]

After Gelbin Mekkatorque was grievously wounded in the Battle of Dazar'alor, his sealed escape pod was guarded by Kelsey during the trip back to Boralus while it was tended to by his assistant Elgin Clickspring and another gnomish engineer.[11] 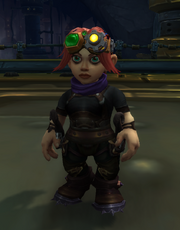 Kelsey in the High Tinkertory.

Kelsey later reached out for help to the capitals of the Alliance, seeking to save the High Tinker when his pod began to power down, putting his life in jeopardy.[12] She planned to ask for assistance from the Mechagon mechagnomes as they possessed advanced techniques in biomechanical repair and improvements. Knowing her plan would not be completely approved of, she arranged to have Mekkatorque's pod secretly flown to Mechagon Island as part of a supply delivery, then quickly traveled there herself to ask for Prince Erazmin's help before the pod's arrival.[13] Kelsey would accompany the revived Mekkatorque, Erazmin, and the adventurer into Mechagon City to clear out the late King Mechagon's remaining forces.[14] After Mechagon was liberated, the mechagnomes chose to rejoin their brethren from Gnomeregan; before a crowd in the High Tinkertory, Kelsey proclaimed Mekkatorque the new King of the Gnomes.[15]

She appears in the Vision of Stormwind at Old Town objective. 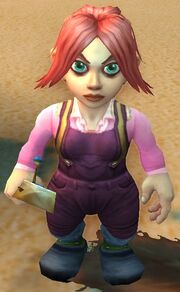 I'm sorry, I can't offer you training. You'll have to find someone more familiar with your skills.

Why hello there, fellow member of the Alliance!

As an official representative of Gadgetzan, I'm here to make sure we poor scattered gnomes can peacefully co-exist with the Steamwheedle goblins here in Gadgetzan! We may even be open to tolerating the presence of their new Horde goblin friends.

I'm sure we can all come to an agreeable decision with your help!

Let's see what you have.

We've barely finished fighting the Burning Legion and the Horde is already up to no good!

<Kelsey glances at the doorway and leans in close to whisper to you.>

And I may have even located his private diary!

Grong's courage and selflessness are admirable

Grong will forever be known as a hero of the Alliance.

Good to see you, <name>. Keep your head down, this whole area is crawling with Ashvane Loyalists.

Well, for now it is.

The Horde is up to something and we're gonna find out what, one way or another.

This section contains information that needs to be cleaned up. Reason: Order. 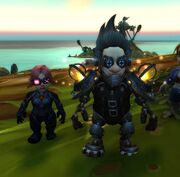 Kelsey and Prince Erazmin during the Great Gnomeregan Run.