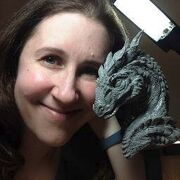 Kimberly LeCrone[1] (also known as Vaeflare) is a Blizzard employee. She is currently a 3D Artist within the Diablo Legacy Team.[2] She also does painting and sculpting.[3]

As a Media Artist

As a Community Manager

Vaeflare is part of the Community Team that won "Best Community Management team" at Dragon*Con 2012.[5]