Centuries ago, Kimbul's temple in Vol'dun on Zandalar was attacked by a naga army led by Summoner Mepjila and Kimbul arrived too late to save his Zandalari followers from death. He hunted the remaining naga down to the last and none escaped his wrath, but as he killed the naga leader she cast a spell that cursed the souls of Kimbul's followers into unending torment. Until their souls were freed, Kimbul could not accept new followers for honor would not allow it.[6] He took a powerful artifact known as the Ring of Tides as his trophy from the battle with Mepjila.[7]

Kimbul was summoned by the Sandfury tribe at Zul'Farrak so they could sacrifice their prisoners - Aramar Thorne, Makasa Flintwill, Taryndrella, Hackle, and Murky - to him. However, Kimbul showed respect to Makasa and Hackle for they were predators and not prey, and he was the Prey's Doom. Bowing to them as fellows, Kimbul told them that they had nothing to fear from him and vanished.[3]

An adventurer transformed into an Avatar of Kimbul.

Kimbul can be found at the Temple of Kimbul in Vol'dun. The naga once more attacked Kimbul's territory, searching for the

[Ring of Tides] that they had lost there during their battle with Kimbul long ago.[8] Seeking his help against the naga threat, the tortollan Tortaka tribe spoke to Kimbul at his temple. Before he could help, Kimbul tasked an adventurer with entering the Veil where his cursed followers continued to fight for eternity and slaying Mepjila's spirit to break her spell.[5] With his followers at peace, Kimbul moved to protect the Tortaka tribe from the naga with the adventurer as his avatar. Afterward, he accepted the Tortaka as his followers.[7]

Kimbul participated in the defense of Zuldazar when Zul and his forces sought to destroy the Great Seal. He, Pa'ku, and Gonk battled Mythrax the Unraveler while King Rastakhan took care of Zul.[9]

The loa assists his chosen aspect during the Battle of Dazar'alor.[10] 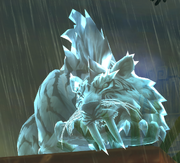 Kimbul be fierce, Kimbul be quick.
His claws be sharp much like his wit.


Kimbul prowls, he will endure.
His focus locked, his footing sure.
Suffer fools - Kimbul does not,
His mind be strong, his temper hot.


Once ya earn dis loa's trust,
His force be yours, his will be just.
He accepts only de best.
If ya got what it takes, be put to da test![12]