King Gordok, formerly known as Ulrok, is an ogre in Dire Maul North.

The title of the king of the Gordunni ogres, residing inside Dire Maul. To become king, you'll have to kill the king that's ruling over the ogres at that point, whoever it is. The Gordoks will respect you through that, and will shower you with gifts. The only disadvantage of being King Gordok is that you can never leave Dire Maul — the ogres will appoint another when you stroll away.

Terrible whispers from the Emerald Nightmare plagued King Gordok's mind, urging him to madness and slaughter. He commanded his clan to indiscriminately murder anyone they could find. In Year 25, the Horde dispatched its forces to scour the Gordunni ogres from Dire Maul. They expected only to kill Gordok, but soon they found the manifestation of Emerald Nightmare's power that drove Gordok to insanity and they knew they needed to eradicate it.[1]

To rule the Gordok ogres, one must simply proclaim oneself king... and then destroy all who might disagree. King Gordok--then merely known as Ulrok--solidified his power by convincing a dozen of his people's strongest warriors to challenge the king at the same time. The wild melee left most of the contestants dead or wounded, and Ulrok's blade easily cut down the survivors and the battle-weary king. To this day, Gordok ogres speak in hushed tones about the "Day of Da Blood." 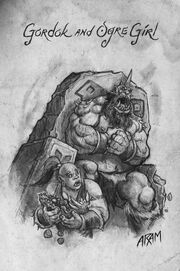 Gordok and the ogre girl.

At some point, he paid Chugara Razorflank to built him a dome of thorns in Dire Maul. He sent raiders to get new slaves for his gladiatorial combats.[2]

King Gordok, seated on his throne in a great stone temple dedicated to a long-forgotten or long-ignored god, he received new prisoners from Wordok.

King Gordok then watched the matches of slaves his clan had enslaved, including the boy Aramar Thorne. He was constantly slapping a young ogre girl to show dominance and threatening the gladiators to kill their opponents. When Aram refused to kill the Woodpaw gnoll Hackle, Gordok ordered to summon the captured wyvern Old One-Eye.

Soon the Hidden attacked Dire Maul and its leader, Captain Malus issued the mak'gora challenge to Gordok. The King initially refused, so Malus's companion the ogre Throgg agreed to issue the duel, but Malus chose to fight as Throgg's champion. Malus killed the ogre leader and became the new King Gordok.[3]

Whether this Gordok and the Gordok encountered in the game were the same is unclear as the Gordok from the book is depicted slightly different: with blue-black beard, nose-ring, and piercings across his shoulders. This may imply that Ulrok had been killed (in original World of Warcraft or Cataclysm) and succeeded by a new one later.

Cho'Rush the Observer backs up King Gordok when the party fights him, although he seems mostly limited to spellcasting instead of engaging in melee attacks. One member of the party should watch Cho'Rush and prevent him from casting beneficial spells on King Gordok or damaging spells on other party members. The rest should concentrate on dps'ing King Gordok; as soon as the King falls, Cho'Rush will cease hostilities. When soloing, it is easier to take out Cho'Rush the Observer first.

You no challenge me, scrubs! I'm da king now and I stay king FOREVER!!!