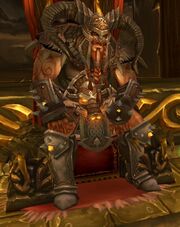 King Ymiron was the king of the vrykul in Northrend. In-game, he lies sleeping within Gjalerbron. His people, the Dragonflayer clan, are still fanatically loyal to him. Having proven himself to the Lich King, he was converted to the undead and is the last boss of Utgarde Pinnacle.

When defeated by adventurers, Ymiron found the Halls of Valor closed to him for his betrayal against Odyn. Helya brought him into her service in the Maw of Souls instead. As Helheim was stormed by order champions, the Battlelord of the Valarjar convinced Odyn to raise the Fallen King so he could be forced to serve the Keeper for eternity, a fitting punishment for dooming his own people.[1]

Under King Ymiron's leadership the Dragonflayer clan finally gained the upper hand against its foes and in a coordinated offensive, the vrykul attacked and drove the jalgar into Kalimdor's lush central forests. Yet on the heels of this victory, tragedy struck as the curse of flesh took another turn. Dragonflayer women began giving birth to small, malformed children - a development that spread fear and superstition among the vrykul clans. While some vrykul blamed Ymiron for this affliction, Ymiron himself believed that the mythical keepers were to blame. Ymiron convinced his people to renounce the silent and aloof keepers, who had not been seen or heard from in generations and promised to unite all vrykul clans to his banner.

His first decree was to cleanse the clan by destroying all of the malformed infants and while many obeyed Ymiron's brutal orders, some could not and left the Dragonflayer with their children in tow.[2] Thus King Ymiron is indirectly responsible for the creation of what is now the human race.

The adventurer uncovered an event of the distant past, where King Ymiron declares that the old gods - the Titans - had abandoned them, and pledges to protect the Vrykul race. His first act is to declare that aberrant children, evidently precursors to humans, be destroyed to preserve the Vrykul racial purity.[3] Earlier it was shown that some families had acted to preserve these children despite the proclamation.[4]

Ymiron was put into a magic sleep before he died, along with many elite vrykul warriors, to be awakened at some point in the future. His wife, Queen Angerboda, attempted to awaken him so they might serve the vrykul's new death god together. The adventurers killed Angerboda before the awakening ritual was completed. However, the Lich King arrived and took Ymiron away to Utgarde Pinnacle.[5] After proving himself, the Lich King made Ymiron undead and had him lead the Scourge-allied vrykul against the Horde and Alliance. As adventurers stormed the keep, the vrykul king made his last stand at Ymiron's Seat where he was killed.

After his death, Ymiron was dragged down to Helheim.

As a mighty warrior held in awe by his people, the gates of the Halls of Valor awaited Ymiron in the afterlife. But the vrykul king's hunger for more power led him to striking a dark bargain with the Lich King, dooming his people to a cursed existence. And so, after his death, he found the eternal Halls to be closed to him. The damned king thus ended up on the shores of the Maw of Souls, in service of Helya.[6]

When Odyn's mortal champion led an assault on the Maw of Souls, they struck Ymiron down. The warrior then convinced Odyn that forcing Ymiron into his service would be a perfectly suited punishment, and so he was brought to the Halls of Valor to serve him for the rest of time.[1] 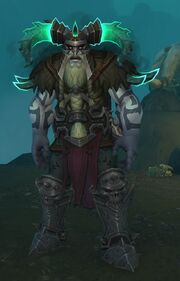 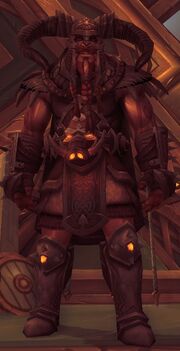