For the achievement, see

The Alliance. The Horde. Two equally useless sides fighting over insignificant goals. I suspect you don't see it that way. Your war could last a thousand years and it would be but a small river feeding into the ocean of the Klaxxi's plans. Their will is to preserve the cycle.
The will of the Klaxxi is eternal.[3]

The Klaxxi are mantid elders untouched by the corruption and insanity that has overtaken the remainder of the mantid swarm. They seek to replace the corrupted empress and reluctantly accept the aid of the player.[4]

With the recent discovery of the Heart of Y'Shaarj by Garrosh Hellscream, the Klaxxi have allied themselves with the Warchief and his Kor'kron Guard. The Paragons have been given their own chamber within the Underhold and will stand against anyone who dares enter Garrosh's Inner Sanctum, where the revived heart was moved.

While 'Klaxxi' is the correct term for the organization in general or as a whole, 'Klaxxi'va' appears to be both the descriptive term and title for individual members of the Klaxxi.[3] 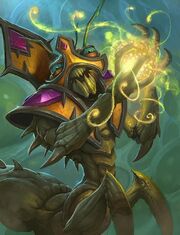 A council of mantid elders known as the Klaxxi are the stewards of mantid history and culture, and their goals are much more long-term than those of the empress. These mantid elders are untouched by the corruption and insanity that has overtaken the remainder of the mantid swarm. They seek to replace the corrupted empress.[5] They recognize that the empress has lost her mind and that swarming Pandaria will mean little if their entire civilization is given over to the sha in the process.[6] Although they are initially reluctant to accept the aid of outsiders, they eventually embrace the player's role as the substitute "Wakener", granting access to their unique arms and armor.

Although the Klaxxi are wise and powerful, there aren't very many of them. But they do have access to the paragons: mantid champions from past eras who were preserved in amber at the height of their strength and buried all over the Dread Wastes. Some of them are war masters, others are ingenious alchemists or master assassins. The Klaxxi can sense the presence of their paragons, and are able to communicate with them over great distances.[7] The Klaxxi are usually also responsible for giving paragons their second names.[3]

As an institution, the Klaxxi is an ancient organization that possibly began as a priesthood of some sort, dedicated to the Old God Y'Shaarj. In the mantid's old tongue, "klaxxi" meant "priest".[8]

The Klaxxi ride massive scorpions into battle against their enemies. A carapace hardened by amber provides superior protection while on the battlefield.[9]

As Kil'ruk the Wind-Reaver once promised,[10] when the Old Gods - specifically N'Zoth - returned, the mantid pledged themselves to the Black Empire. The fallen Klaxxi'va were revived and empowered by the Void.[11]

These Mantid Elders are untouched by the corruption and insanity that has overtaken the remainder of the Mantid Swarm. They seek to work with the races of Pandaria to restore their Queen to glory.

Reputation with the Klaxxi is gained via normal questing through the Dread Wastes. Completing the main Klaxxi storyline will get adventurers up to honored. After that, seven daily quests each worth 130 rep are offered each day. Getting to revered will unlock two additional daily quests.

[Dread Amber Shards], which are a rare zone drop from any mob in the Dread Wastes. Ambersmith Zikk will collect 5 in the repeatable reputation quest

Klaxxi dailies are focused around a particular hub each day. Some hubs have "hidden" dailies, which start by killing an otherwise unremarkable elite NPC in the area.

As Klaxxi paragons are wakened, they can be asked to provide adventurers a buff while questing in the Dread Wastes. Only one enhancement and one augment may be active at a time.

± Upon reaching exalted with the Klaxxi and doing the final quest chain, Malik is no longer available to give this buff. It is given by his Halberd of the Unscathed, located on the weapon rack behind Ambersmith Zikk.

The Dread Wastes is all about the Klaxxi. The quest flow blends "level-up" quest progression with a daily reputation grind, so you begin working with the Klaxxi and earning rep almost immediately after setting foot in the zone. Your progression through the one-shot quests yields direct benefits to the eventual daily experience, and your progression into the higher rep levels through dailies will in turn open up more one-shot story quests.

When you first arrive in Dread Wastes, you stumble upon a paragon, Kil'ruk the Wind-Reaver, and wake him up – he then introduces you to the council, and they allow you to continue waking up paragons to help build their forces. These paragons become your daily questgivers, so as you're waking them up you’re also unlocking more dailies. They also provide you with buffs that let you do things like mind control enemies or double-jump while in the Dread Wastes.[6]

Once players become Exalted with the Klaxxi, they can start a short quest chain that starts with

Several Paragons carry on conversations with each other once they make it back to Klaxxi'vess:

Kaz'tik and Korven
Kaz'tik says: It is an honor to serve alongside you, Prime. I have studied your work extensively.
Kaz'tik says: Thanks to the careful notes you kept while developing the preservation chamber, I was able to create a modified version that could preserve Kovok here as well.
Korven says: Yes, he certainly looks... healthy.
Korven says: I never imagined my work would go so far. It is a testament to the great power of the kypari. Our civilization would never have recovered if it weren't for them. Remember that.

Kil'ruk and Ka'roz
Kil'ruk says: I have heard of your "heroism," Locust. They say your raids on mogu labor camps and farmlands delayed completion of the wall by decades.
Kil'ruk says: I cannot argue with your results, but how can a proud warrior of the swarm make his name chasing down peasants and farmhands?
Ka'roz says: Easily: You don't have to leap as far between kills.

Skeer bored
Skeer says: Grrr... I need to kill something. All this waiting around is driving me crazy.
Iyyokuk says: Quiet, you.

Xaril and Hisek
Xaril says: How does it feel to go rogue a second time, Swarmkeeper? Your empress was also gripped by paranoia, was she not?
Hisek says: Grand Empress Zek'hara masked her true intentions behind the guise of matronly worry. She claimed her overbearing ways were necessary to protect us.
Hisek says: When she tried to forbid the swarm, it was to prevent, as she put it, "a senseless loss of life."
Hisek says: In reality, she was obsessed with control. She aspired to stay in power long past her time, and was willing to sacrifice our eternal cycle to achieve that. We had no choice but to end her.
Hisek says: How does it feel? I have no regrets, if that is what you are asking. I am honored to serve the will of the Klaxxi.
Hisek says: And having seen what Grand Empress Shek'zeer is doing to our land... I need no convincing.
Xaril says: Of course.
Xaril says: I served Shek'zeer for a time, you know. Before I was preserved. Her madness is nothing so rational as ambition.
Xaril says: She trusts no one. Paranoia gnaws at her mind. She is driven by fear unrelenting.