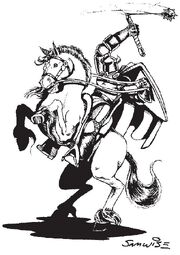 Knight of the Brotherhood of the Horse

Knights are traditionally powerful horse-mounted warriors of the Alliance and the kingdoms of humanity. They are usually humans, although other factions have knights as well such as the elves. Many famous human warriors were knights such as Sir Anduin Lothar, Regent of Stormwind and Supreme Commander of the Alliance forces during the Second War. For centuries they have been the bane of many enemies: the legendary Orgrim Doomhammer, the warchief who fell Lothar, was indeed killed by a human knight. These legendary mounted warriors also proved to be a decisive factor in many battles; particularly in the Gnoll War and the First Siege of Stormwind Keep. Orcs in particular respected and feared them, describing them as "... fiends [who] rode atop beasts of muscle and sinew that crashed through our ranks...". They also symbolize respect and honor among the humans. This is demonstrated by Sir Rufus Montaine, as he was the first to teach the future Horde Warchief, Thrall, of respect. When one becomes a knight, he or she is given the title "Sir" or "Dame" in front of his or her name. An armored knight on his charger with his cape flowing is an icon of the might of the human armies.

Knights tend to be assisted by squires.

Knights appeared as units on the human or Alliance side in Warcraft I, Warcraft II, and Warcraft III. They are the classic counterpart to raiders and ogres.

Paladins are also called knights, as during the Second War their only difference came from their ability to wield the Light. Many if not most came from the ranks of former knights, and were even referred as "Holy Knights".[1] Like knights, some paladins also have the title of "Sir", most notably because some of them have risen up from the ranks of former knights, but not only, like Sir Thomas who comes from a family that owns and worked a pumpkin farm in Tirisfal Glades.[2] The summoning and usage of Chargers and Warhorses in game mechanics suggest paladins' favor mounted combat in lore which only strengthens the similarity. Because of this, when speaking Knights and Paladins are pretty much interchangeable to most as Tirion Fordring often called his paladins knights and Turalyon was often referred to as a knight even though he was the only original member of the Silver Hand not to be a knight. Thus, paladins of the Knights of the Silver Hand and Blood Knights may be called knights, but not all knights may be called paladins.

Death knights are also called knights even when they were not corrupted or risen up from the ranks of former knights. The Knights of the Ebon Blade are an order of death knights.

Knights of the Silver Hand devote themselves as diligently to combat training as much as they do to their daily prayers, honoring their battle skills in order to best defend the weak and the innocent.

Knights of the Brotherhood of the Horse

During the First War, the Kingdom of Azeroth (later known as Stormwind) was served by an order of knights called the Brotherhood of the Horse, Knights of Azeroth, or the Knights of Stormwind.

These knights were the fighting elite in King Llane's service. Using the difficult skills required for mounted combat, these warriors wielded huge maces in order to crush their opponent's skulls. Their warhorses made them fast and deadly, as they could maneuver much more quickly than an unmounted foe. Knights were well respected throughout the realm, and the tales of their fighting prowess were known far and wide.[3]

Knights of the Kingdoms of Lordaeron

The forces of Lordain's tribe were said to have been knightly in appearance and mindset even before joining Arathor.[4] 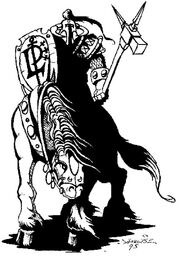 Knight during the Second War.

The knights of Lordaeron represented the fiercest fighting force in the armies of the Alliance. Protected by suits of heavy armor, they carried mighty warhammers with which to crush all who would threaten the freedom of their lands. Astride great warhorses, these honorable and just warriors served as a symbol of order to the peoples of Lordaeron in these dark and chaotic times. Having learned of the fate the Knights of Azeroth suffered after the First War, they had sworn to both avenge their fallen brethren and free their homelands from the grip of the Orcish Hordes.[5]

The paladin order formed during the Second War called themselves the Knights of the Silver Hand and were those of only the greatest virtue among the knighthood of Lordaeron,[6] and were tutored in the ways of Light magic.

During the course of the conflict, the Alliance effectively countered the ogres of the Horde with mounted knights, a strategy that served them well throughout the war.[7]

After the war and during the course of Thrall's liberation of the orcs from internment camps, a group of knights was serving Aedelas Blackmoore and protecting the camps. When the Horde was liberating the orcs from Hammerfall, a knight managed to critically wound Orgrim Doomhammer. Eventually, the knights fought in the final battle for Durnholde. With Durnholde leveled and knights defeated, liberating the remaining camps became easier.[8]

Though the hearty knights of Azeroth were destroyed during the First War, the shining knights of Lordaeron still continue to serve amongst the warriors of the Alliance. Wading into combat astride their noble warhorses, the knights are renowned for cutting bloody swathes through enemy ranks. The knights' speed and mobility mark them as some of the most versatile warriors of the Alliance.[9]

Knight during the Third War.

This proud young man carries himself as if he were the lord of the battlefield. Resplendent in his (probably hereditary) armor, he spends much of his time testing the balance of his lance and speaking with his horse.

Aside from champions, the knight is the warrior elite of humanity, especially of the Alliance, the best of the normal troops thus among the most feared. They typically form ranks and charge, which causes a devastating effect on the battlefield. Knights line up for a coordinated charge, using their mounts' mobility to give them an advantage or to overrun an enemy's line so they may trample their opponents.[10]

Human Knight in the TCG: "Through dedication and conviction, a knight can come to harness the power of the Light."

In World of Warcraft, many knights are deployed through the game, though due to game mechanics they are in the form of warriors, paladins and death knights.

"Knight" was also a rank title given to people for PvP prior to the revamping of the Honor System.

For Knights of the Silver Hand, Blood Knights and Death Knights NPCs, see their respective pages.