Not to be confused with Korvash.

Kor'vas Bloodthorn is a night elven demon hunter of the Illidari.

When she was young, Kor'vas watched her family members die at the hands of the Burning Legion (most likely during the War of the Ancients or the Third War). Thus, she decided to join the Illidari and become a demon hunter by cutting out her eyes and dedicating herself to the destruction of the Legion.

Kor'vas was present when Illidan Stormrage, Lord of the Illidari, was preparing his demon hunters to launch an assault on a demonic world ruled by the pit lord Azgoth. However, Kor'vas still harbored doubts; bending the knee, she openly asked Lord Illidan what made the Illidari — who had demonic energies coursing through their veins and gnawing at their every thought — different from the monsters they fought against. Illidan leapt down on the ground in front of Kor'vas and looked at her silently for a moment before rising to a standing position again. He then proclaimed to the Illidari that they would not sit idly like the inhabitants of Azeroth, waiting to become the demons' prey; instead, they would take the fight to the Legion's worlds and prey upon them. The demon hunters charged into the portal to Azgoth's domain, fighting their way through the felguard defenses of the demonic citadel. During the ensuing battle with Azgoth, Illidan was wounded by the pit lord's enormous flail. As the annihilan was about to finish the Betrayer, Kor'vas leaped forward and blocked the blow with her warglaive. In response, the annihilan backhanded her up against a wall and growled that she smelled "more demon than hunter" and that she would serve the Burning Legion well. Kor'vas simply replied "Never" as Illidan launched himself into the air and stabbed the pit lord in the back with the Twin Blades of Azzinoth, instantly killing him.

After the battle, Illidan retrieved Kor'vas' dropped glaive and approached her again.

Illidan Stormrage: You wish to know the difference between the demons and us? They will stop at nothing to destroy our world...
Kor'vas Bloodthorn: And we will sacrifice everything to save it.

Illidan's lips curved into a slight smile as he gave Kor'vas' glaive back to her, before leaping up on a cliff and proclaiming that the Legion would know of the demon hunters' victory, that they would come to fear the Illidari and that the demon hunters were now prepared.[1][2]

On the prison home world of Mardum, she fought alongside the demon hunter as much as she could. An imp mother named Prolifica resides in Foul Creche. She was reported by to the camp cause Kayn properly needed help killing a demon.

Upon returning to the Black Temple, Illidan Stormrage was slain by the heroes of Azeroth and Maiev Shadowsong. Kor'vas exclaimed to avenge the master but failed and were put in stasis for a time until the Burning Legion returned for the third invasion of Azeroth. Upon release, Kor'vas was ready for a fight and the prison was out of control because of being released too. Two in particular: the Ash'golm and Glazer were running loose and needed to be sealed back up in their chambers. Altruis and Kayn were dealing blow after blow and Kor'vas tried to stop it from continuing but couldn't. The Pool of Judgement can reflect upon memories of the past, and as a result came to choose between Altruis and Kayn.

Soon after, Kor'vas spotted the traitor Varedis Felsoul amongst the Legion, with powerful weapons in hands.[3] Kor'vas was then sent by Altruis/Kayn to speak with the demon hunter to meet them at Krasus' Landing. Upon return, she was relieved that the champion was successful in obtaining the artifact. They glided to an island in Dalaran to complete the ritual to open the portal to the Fel Hammer.

In Azsuna, she is greeted by the champion and accompanied them to confront demon hunters that were being held captive. Kor'vas questioned them what happened and who did this to them. They simply responded that they didn't give in, for they did things to them for the demons promised us unimaginable power. A warden tried to convince them to turn traitor and heard screaming for Cyana Nightglaive was among them. She went southwest with the warden Cordana Felsong. Kor'vas was looking forward to killing her for what she did to Cyana. They find the blue drake named Stellagosa and was to the find the key to free her. Upon release, the drake flew to the one responsible of chaining her. Kor'vas wasn't too happy of the result that transpired as she rushed towards the drake and Cyana direction. She told Cyana to not give in, but simply was pursued with words of if she only knew the Legion's power and Cyana told Kor'vas to join the Legion. Kor'vas rejected and said that no one can be allowed to become a Felsworn traitor working for the enemy.

On the Fel Hammer, troops were needed if they are to succeed in there part of the war. Kor'vas wanted to know if Gaardoun's new Ashtongue warriors were ready and responded that in the future it will take longer to make more. They come across a demon hunter named Loramus Thalipedes, and Kor'vas thought if it is so would they save him or kill him. She told the demon hunter to be careful when talking to Loramus because half the time he's down there threatening them in the demonic tongue. Blood is required and wished that she was going with the champion. After bring back Akama or his shade, she was recruited alongside him. She told the demon hunter that she should have been the first champion.

Kor'vas with the other class order champions, Khadgar and Velen.

Kor'vas with Magni and the other Alliance heroes.

Kor'vas was one of the order hall champions who met Khadgar and Velen at Krasus' Landing to discuss the Pillars of Creation.[4]

Kor'vas and an adventurer observe the demons steal the heart of Highlord Kruul, who the Illidari had defeated during the invasion of Outland, from the vaults of Dalaran. After Prophet Velen confirms that Kruul is regenerating within the Nether and his heart is hastening the process, Kor'vas and the adventurer travel to the Stair of Destiny in Hellfire Peninsula and work to pry open a doorway to Kruul's realm. Kor'vas decides that the two of them cannot handle Kruul alone and sends the adventurer back to Dalaran to report to the Council of Six while she keeps the portal stable.[5][6][7]

Later, the adventurer, Kor'vas, and Velen confronted Kruul inside the Twisting Nether. Kor'vas was initially held captive by Inquisitor Variss, but after his death aids in the fight with Kruul. Before he could die Kruul overloaded himself with power to self-destruct and kill his opponents along with him, but Velen saved Kor'vas and the adventurer.[8]

When the Fel Hammer comes under attack by Legion ships and Vandel sends a message asking for aid on the surface of Mardum, Kor'vas travels down with the Slayer to help and to find Lady S'theno.[9][10] Kor'vas, S'theno, and the Slayer lead the defense of the Fel Hammer against the demons, risking destroying the ship by using its damaged weapons.[11] Afterward, S'theno travels to the Broken Shore to find replacement parts and Kor'vas directs the Slayer to her.[12]

When Magni Bronzebeard called upon the champions of the Armies of Legionfall to draw the corruption out of the Sword of Sargeras, Kor'vas carried the Twinblades of the Deceiver if the player was not a demon hunter, representing the Illidari.[13]

Kor'vas in World of Warcraft. 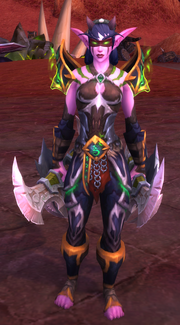 In the Stair of Destiny

Vault of the Wardens

Kor'vas wielding the Twinblades of the Deceiver on the Skyguard in Silithus.

Illidari Foothold
If it weren't for the Black Temple being under attack, I wouldn't mind staying here longer.
There are so many demons to kill.

Demon Ward
For years we were shunned, banished to the darkest depths of the world by the Wardens.
Now, we must rise to the hardest challenge our world has ever faced. Now, we must defend Azeroth against its greatest enemies.

<Name>, the Burning Legion is sending the most powerful demons in its arsenal against us. They do not intend to lose this third war and they will stop at nothing to see to it that we are all wiped from the face of Azeroth.

Together, we will return the favor.

Thank you for saving us over on Faronaar, <name>.

I can't believe that Cyana turned Traitor. She betrayed us all. There are others who have also become Felsworn. We will hunt them down and kill them along with their new Legion masters. 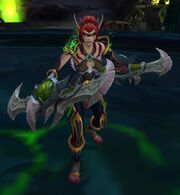