Crusade Commander Korfax is a human warrior at Tyr's Hand in the Eastern Plaguelands. He was formerly known as Korfax, Champion of the Light located at Light's Hope Chapel, and still appears in the Scarlet Enclave under his old title.

He is the Champion of the Light of the Brotherhood of the Light, a subsection of the former Argent Dawn's ranks, now the Argent Crusade of which he is a Crusade Commander.

During the Third War, Korfax fought alongside Alexandros Mograine, watching the Highlord open the fetid skulls of the living dead with his boots.[1]

Korfax was originally located at Light's Hope Chapel in the Eastern Plaguelands, offering quests to adventurers to collect

[Dark Iron Scraps] to then exchange them with him for an

He also told the story of Ramaladni, a warrior of the Brotherhood and a pupil of Highlord Darion Mograine, who went to Naxxramas in search of revenge and never returned, asking the adventurers to find out his fate.[3] When they returned only with his ring, Korfax announced that this did not bode well for Ramaladni, but that his ring might be salvageable, leading to the creation of

Finally, he aided warrior adventurers in the creation of the Dreadnaught's Battlegear, asking them to bring back to him the desecrated battlements and wartorn plate scraps they would come across in their battles with the Scourge, in Naxxramas, to forge them an armor worn by heroes.[5]

Crusade Commander Korfax was present during the Battle for Light's Hope Chapel, defending the chapel alongside Eligor Dawnbringer and the Argent Dawn against the Scourge and the Death knights of Acherus. Following the withdrawal of the Lich King, he witnessed the merger of the Argent Dawn and the Order of the Silver Hand as the Argent Crusade, under the command of Highlord Tirion Fordring.[6]

He was among the first to plunge into the Northrend campaign, where he appeared as the Crusade Commander of the Crusade's troops at the Argent Stand in Zul'Drak. He participated in the experiments to learn more about the saronite, an evil ore used by the Lich King to arm the Scourge, attempting to destroy it with his

[Arcanite Reaper], but it was ineffective.[7]

Despite Inigo Montoy's treachery in the resurrection of Kel'Thuzad, who became the lich Thel'zan the Duskbringer for serving the Lich King, Korfax and the Brotherhood eventually triumphed over the Scourge in Northrend and returned to the Eastern Plaguelands.

Following the Cataclysm, Korfax appeared alongside Eligor Dawnbringer and Angela Dosantos outside Tyr's Hand in the Eastern Plaguelands to cleanse the town from the Risen who infested it with an assault force of one hundred men.[8] Aided by adventurers, Korfax and the Brotherhood were able to capture the city and eliminate the Scarlet leadership including the then undead Valdelmar himself.[9] At the same time, he ordered adventurers to retrieve, within the Scarlet Crusade's barracks, the artifacts that are the

[Shroud of Uther], and

[Gavinrad's Sigil], hidden in chests as the objects are too holy for their now-undead hand to touch. Once in his possession, he announces that he intends to deliver them to Maxwell Tyrosus.[10]

With this, the Scarlet Crusade definitely lost its hold over the city,[11] which came under the control of the Brotherhood of the Light.[12]

Some time later he appeared alongside several other members of the Brotherhood of the Light inside Stratholme to aid adventurers in retaking the Scourge-infested city, ordering them, in particular, to eliminate Ramstein the Gorger for all the atrocities the monster has committed.[13]

Inside the Stratholme Service Entrance

The subject of this section was removed from World of Warcraft in patch 3.0.2 but is present in Classic.

There is only the Brotherhood.

Here, in the very chapel where Uther the Lightbringer joined the Order of the Silver Hand, I, Korfax, Champion of the Light, will inspire fear into the fearless.

Nothing will curb my fury - not the Scarlet Crusade, not the Argent Dawn, not my brothers, not even you.

This is a fine mess we've gotten ourselves into. We're overdue to join up with our forces in Icecrown and now we're entangled in this debacle, stuck between the Scourge and the Drakkari.

I told the highlord it was a mistake to come here.

See what you can do to help out there. 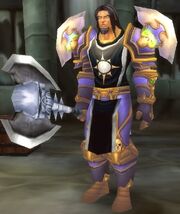 And don't let Tyrosus know that I said that... it would be a terrible shame if I had to brutally maim him should a brawl break out.

What is Dreadnaught armor?

The first suit of Dreadnaught armor was made exclusively for the Scarlet Highlord Mograine. Whilst donning the full suit, the Highlord looked himself to be a demon from the depths of the Nether.

Aye, 'twas quite a sight to behold as Mograine would wade into a hundred Scourge, Ashbringer held high, and come out on the other side in a cloud of dust and flames - enemies left in ashes beneath his feet.

It was not until after his controversial death that the knights and warriors of Lordaeron would wear similarly fashioned suits in honor of their fallen hero. While the death of Mograine was a great victory for Kel'Thuzad, the resulting martrydom would be felt until the end of the war.

Where one did fall, many would rise...

Korfax, where can I find Dark Iron scraps?

Is this a serious question? You really don't know?

If you are the cowardly sort, afraid to get their hands too dirty, you will find Dark Iron scraps on the creatures in the Burning Steppes and Searing Gorge.

If you're the bloodthirsty adventuring type, the dungeons of Blackrock Spire and Blackrock Depths hold quite a large supply of the scraps.