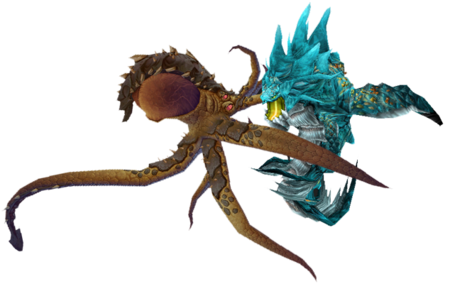 Kraken, or krakken, are two different types of sea monsters. The first type are giant squid-like creatures with tentacles.[1] The second type are more fish-like with giant fins and smaller in size.[2]

Aside from Azeroth, there are also kraken on the alternate Draenor.[3][4]

One version of the kraken[5] are huge squid-like creatures with four eyes and eight appendages, often referred to as leviathans around Pandaria.[6] They are servants of Neptulon the Tidehunter and normally dwell in the Abyssal Maw and not on Azeroth; however, fossils and tales suggest that the mighty creatures have been visiting Azeroth for millennia.[7] Ozumat is the patriarch of all kraken.[8] Not much is known about them, although Ancient Leviathans can be found at various points in the seas of Townlong Steppes. It is possible they are one of the squid-like krakken mentioned in troll legends.

The Forlorn Depths outside the Broken Shore are a massive breeding ground for kraken, filled with large, incubating kraken eggs.[9]

The second type of kraken are more fish-like, with armored hides, giant fins, large mouths, dorsal spikes, and a horizontal tail reminiscent of whale flukes. They have scales, but do not appear to have visible gills. Little lore has been given about them.

Following their reappearance, the kvaldir seek to free the kraken Leviroth imprisoned five hundred years ago by Queen Azshara. The kvaldir were trying to use it on the naga of Riplash, or on the tuskarr of the coast, or possibly on any living things that happen to be standing in the way. Far in the upper reaches of Northrend, north of the newly constructed Crusaders Coliseum lies the fishing village of Tualiq. This small tuskarr village was also attacked by the kvaldir and was quickly overrun, the bodies of slain Tualiq villagers littering the icy beaches. Drottinn Hrothgar leads the kvaldir in this region, and the kvaldir seem to have one motive in mind - to summon a kraken from the depths of the Northrend seas. Players can kill the summoners that seek to use the kraken, and they can kill the kraken itself from above, riding hippogryphs and hurling spears at the attacking creature. Once again, the kvaldir seem to be focused on using a kraken to obtain their vengeance.

Another kraken is in an unlikely location - just off the coast of Theramore, where the beam from the lighthouse disrupts its rest. If the lighthouse is lit, Tethyr will rise from the depths and attack the city. Players can kill Tethyr and ensure that Theramore remains undisturbed.

The Lurker Below that is found in Serpentshrine Cavern is another kraken, though how he got to the shattered remains of Draenor is unexplained. This kraken appears to serve as a guard for Lady Vashj, and it is entirely possibly the beast is simply under Vashj's control.

Another "kraken" - or rather, kraken model - is the sea goddess Oacha'noa, a possible loa spirit that the tuskarr revere. Players are sent to ask for Oacha'noa's guidance in regards to the problems plaguing the tuskarr village of Indu'le - which is the fault of Malygos' tamperings with ley lines. Oacha'noa asks players to deliver a message that the tuskarr must stand and fight alongside Horde and Alliance against Malygos and the Lich King; otherwise, the spirits of the tuskarr will be destroyed by the evil rising in Northrend. Oacha'noa seems to have nothing to do with the other kraken - she's simply a sea goddess that took on kraken form.

Manta may have been a giant kraken.