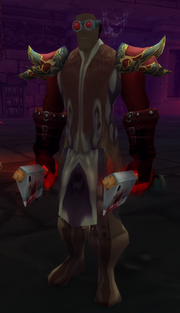 Krastinovian Carvers are humans and undead, appearing after the Chamber of Summoning in Scholomance. Killing a carver within 10 yards of another carver cause their bloodthirst to spread to that carver, increasing its stack.

Pull and kill one of the Flesh Horror-Meat Graft mobs to make some room. Start pulling carvers one-or-two at a time, but before killing one, make sure another carver is within 10 yards. As long as the stack does not break by killing mobs too far apart from one another, it will double each time. This means that the ninth carver killed will have a stack of 99. (28 = 64, 29 = 128, but the stack limit is 99) Be warned that the carvers attack faster with each stack, but also take more damage.