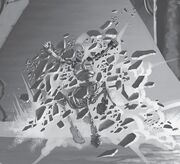 Krenka was the founder of the Krenka clan. According to ancient tales, when Krenka grew old he wandered out into the Barrens to die, but promised to return to aid his people if the need was great. To this day, following his example, those centaur who grow too old or injured to fight leave the tribe to die alone, their fates never known by their people.[1]