This article is about the playable race. For human lore in general, see human. For Kul Tiras lore, see Kul Tiras (kingdom). 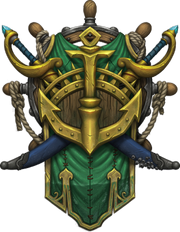 The Kul Tirans[1][2] (or Kul Tiran humans[3][4]) are one of the playable Alliance allied races in World of Warcraft, introduced in Battle for Azeroth. A specific breed of human that hail from the island nation of Kul Tiras, they are brawnier than their mainland cousins, but share a history spanning the wars with the Horde.

Kul Tirans start out in their capital city of Boralus, before reporting to their faction's embassy (much like all other allied races). They tend to ride horses like humans do, albeit a sturdier variety, and speak the same Common language.

Kul Tiras was founded by fearless explorers who sailed uncharted waters in search of adventure. As a key member of the Alliance of Lordaeron, the Kul Tiran navy dominated the seas of Azeroth with its legendary fleet. But after years of turmoil and hardship, the kingdom grew isolated and vulnerable to dark influences. Thanks to the help of brave heroes, House Proudmoore has been restored and Kul Tiras is poised to fight alongside the valiant Alliance once more.[5]

Kul Tiras was founded by fearless explorers who sailed uncharted waters in search of adventure. As a key member of the Alliance of Lordaeron, the Kul Tiran navy dominated the seas of Azeroth with its legendary fleet.

Katherine Proudmoore: Every Kul Tiran shares a bond with the sea. From the tides, we draw our strength. Our courage. For a time, we let fear and distrust divide us. Lost in a storm of doubt, we forgot what it meant to stand as one people. As one family. Today, Kul Tiras proudly flies the Alliance flag once more. Whatever awaits us on the horizon, we will face it... together.

The humans of Kul Tiras can have a more robust and rugged look than their continental brethren.[6]

[A Nation United] and completed the Tides of Vengeance War Campaign. The recruitment quests became available in patch 8.1.5 on 12 March 2019.

Once these requirements are met, players must then complete the following recruitment questline: