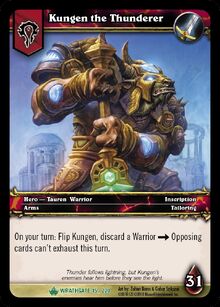 Kungen (known for a period as "Wowkungen" on Lightning's Blade Europe) is a male Tauren (one time goblin) character on Tarren Mill Europe played by Swedish player Thomas Bengtsson. He used to be the guild leader and main tank of Ensidia. Prior to the merger with Curse, he had been the guild leader of Nihilum. With the release of Warlord of Draenor, Kungen has reestablished the guild Nihilum.

Today, Kungen streams on Twitch.tv on the account name KungenTV.