Lasan Skyhorn (pronounced "LUH-sawn")[1] is the chieftain of the Skyhorn tribe, one of the four tribes of the Highmountain tauren. He is almost always accompanied by his giant eagle mount, Aviash. Unlike this fellow chieftains, Lasan is a boisterous and jolly individual. He enjoys flying as much as a good fight. Lasan and his tribe regularly clash with the harpies of Highmountain.

When the Burning Legion returned to Azeroth, Spiritwalker Ebonhorn called a meeting between the leaders of the tauren tribes — Ulan Highmountain, Jale Rivermane, Lasan Skyhorn and Torok Bloodtotem — as well as the Underking of the drogbar, Dargrul. Like Torok, Jale and Dargrul, Lasan was shocked at Ebonhorn's revelation that according to the spirits, the power of the hammer would be wielded against the Legion by an outsider rather than a native of Highmountain, but he nonetheless agreed to obey the spirits at High Chieftain Ulan's command. After Dargrul stole the hammer and used it to kill Ulan, Lasan told Ulan's daughter, Mayla, that the Skymane could not spare anyone to hunt him down, as there was nothing they could do against the power of the hammer. As the drogbar would use the hammer against the tauren villages, the chieftains had to defend their own lands from the assault, and so Lasan was forced to depart from Thunder Totem along with Torok and Jale.[2] 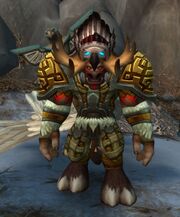 Lasan in World of Warcraft.

After Riverbend is destroyed by Dargrul, the adventurer is sent by High Chieftain Mayla to assist the Skyhorn tribe. Upon arriving at Skyhorn, which is under attack by harpies, Lasan informs them that the drogbar are not the only threat to Highmountain and that he will not send forces to support Mayla until High Crawliac, the queen of the harpies, has been dealt with. After helping secure Skyhorn from the immediate harpy threat, the adventurer, Lasan and his eagle riders head into the Haglands — the heart of High Crawliac's domain. After culling a sufficient amount of the Haglands' defenders, including High Crawliac's three highest-ranking lieutenants, the champion assaults the Witchqueen's throne with the aid of the Skyhorn chieftain. Impressed by the adventurer's prowess, Lasan names them "Skyfriend" and agrees to travel to Thunder Totem to once again declare his allegiance to Mayla.

Lasan and his eagle riders later participate in the battle against Dargrul's forces at Snowblind Mesa.

During the campaign of the Armies of Legionfall, a jovial Lasan led his Skyhorn Interceptors on War Eagles into battle against the demons at the foot of the Tomb of Sargeras, giving Mayla Highmountain's ground assault covering fire.[3]

He also participated in the Legion Assaults directing the class order leaders.

Lasan Skyhorn was one of the Highmountain tauren that traveled to Highmountain Summit in order to thwart the Necrodark's ritual to incarnate Uul'gyneth.[4]

Lasan and his eagles arrived to Orgrimmar in order to aid his new Horde allies in freeing Talanji and Zul from Stormwind's dungeons. He provided transport. When the infiltrators and prisoners managed to escape throughout the city to the Harbor, Lasan and his eagles attacked a group of Alliance army stationed there, grabbing them into the air. He and his eagles then landed on Talanji's ship.[5] Following the arrival of the Banshee's Wail to Zuldazar, Lasan resides on the ship, where he expresses his belief that he and Aviash could beat the Zandalari Empire's best riders in a race and fight.

During the Faction Assault on Vol'dun, he provided agents of the Horde the use of Aviash so they may reach the Alliance airship commanded by Captain Granger and assigns them the task of tearing it apart from the inside, while he rains death from above. Following the captain's death and the destruction of the airship, Lasan declared that the skies belong to the Horde.[6]

The Haglands
Our prey is on the retreat! Time for us to push our advantage.