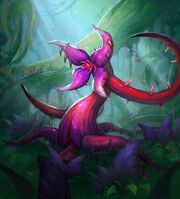 A lasher in Hearthstone. 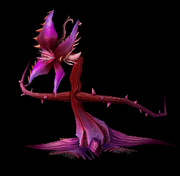 A lasher in World of Warcraft.

Lashers are a type of ambulatory plant found in a multitude of areas across Azeroth, Outland and Draenor. Orchid lashers[1] are similar to other lashers but have particularly large flowers. Lashers are classified as elementals in World of Warcraft.

Many lashers in the Azuremyst Isles were affected by the contamination caused by the Exodar's crash.[2][3] The mutated tanglers near the Vector Coil appear to have gained a certain degree of sentience as a result of the energy leaking from the crystals, and have learned to create, set, and conceal vicious traps.[4]

The root trappers of Azuremyst Isle hold restorative medicinal properties in their vines. Through proper treatment, the vines can be broken down into a powerful healing ointment.[5]

The lashers of Un'Goro Crater are known as Bloodpetals, and are known for their fascinating life cycle.[6]

Native to the ashen soils of the Firelands, the crimson lasher was transplanted to Azeroth with the help of the Guardians of Hyjal.[7] 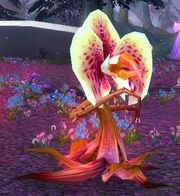 A lasher launching a volley of razorpetals in Hearthstone.