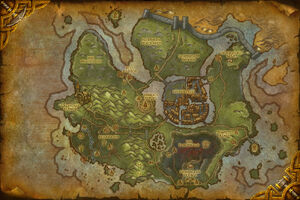 I need you to pull through, <name>. This dosage is strong enough to kill a horse.

But I know you. I know what you're made of. You will be fine.

Trust me. I know what you're going through.

Now drink up and close your eyes.

Krennan Aranas says: I am not giving up on you, <name>. I don't have a cure for the Curse yet... but there are treatments. You will have control again.
Lord Godfrey says: Give it up, Krennan. It's time to put this one down. It's protocol.
King Genn Greymane says: Tell me, Godfrey. Those that stayed in Gilneas City so that we could live. Were they following protocol?
King Genn Greymane says: I didn't think so. Now, hand me that potion, Krennan... and double the dosage.

After completing the quest, the three named NPCs disappear and Godfrey stands toward the exit. Players are released from the stocks and phase in to the real world.