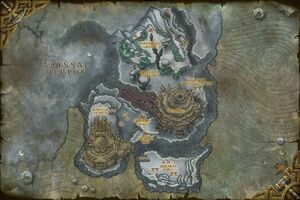 Claimed by the Horde this cavern is where many of the survivors from Nespirah are taken, along with the adventurer while escaping before Nespirah's bio-defenses kill everything inside her.

When the group decides to make a forward base in the Ruins of Vashj'ir so that the naga don't discover the cave, many of them leave to the new post. However, after being defeated they eventually return to cavern, except for Captain Vilethorn who is killed in an attack at the forward post.

The list of notable NPCs when Horde players first arrive

The list of notable NPCs that remain after most leave