The Legionfall Construction Table is a table found at Deliverance Point on the Broken Shore where players can provide resources to construct three buildings. Each building provides support throughout the Broken Isles in the form of buffs. Commander Chambers stands near this table. 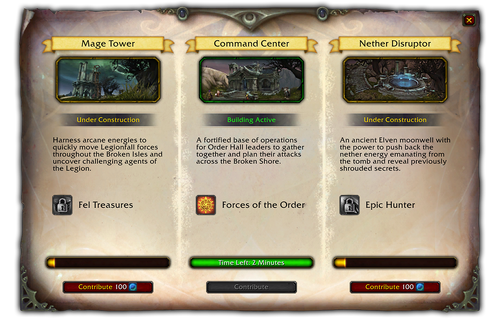 Players can contribute to the construction of three different buildings by accessing this table. The first time a building is established, a brief scene plays and a quest becomes available that grants the buffs associated with the building. Each building provides access to different benefits, and there are a variety of extra bonuses each building has a chance to provide. Contributions toward each building are accumulated across the player's game region.

Constructing each building requires a steady influx of

[Legionfall War Supplies]. Once constructed, the building is available for 3 days, during which players can reap the benefits the building provides. The building will come under attack on the last of those days, after which it is destroyed and must be rebuilt. Players then need to wait a cooldown period of one day before one can contribute again to rebuild.[1]

Harness arcane energies to move Legionfall forces quickly throughout the Broken Isles and uncover challenging agents of the Legion.

A fortified base of operations for Order Hall leaders to gather together and plan their attacks across the Broken Shore.

Benefits Include: Forces of the Order, which provides access to dungeon World Quests, the ability to call in Legionfall Reinforcements, and a Challenge Mission.

Players also have access to the Class Order Command Map here, so one can send their followers on missions without having to travel back to their Class Hall.

An ancient Elven moonwell with the power to push back the nether energy emanating from the tomb and reveal previously shrouded secrets.

Benefits Include: Epic Hunter, which provides you with access to world bosses, Unstable Nether Portals, and Armorcrafter Commendations.