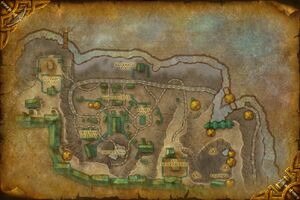 Hand over your Life Savings to Trade Prince Gallywix on the Trade Prince's Yacht on Kezan.

We've got all the moolah that we need. There's only one thing left to do now, boss: get you to the Trade Prince's yacht. It's about to leave port!

We're gonna have to hurry. Hop in, 'cause I'm driving!

Oh, <name>, it's you. What an unexpected surprise.

<The Trade Prince rubs his hands together.>

Congratulations, you just made it. I see that you've brought me all that I asked for, including your hot rod.

A bazillion macaroons couldn't have been easy to come by. I'm now the wealthiest, most powerful, goblin on all of Azeroth!

TOO BAD FOR YOU THAT I'M CHANGING THE TERMS OF OUR DEAL!

You're now my slave. Get below deck and take a turn shoveling coal. Next stop, Azshara!

On accept
Sassy Hardwrench says: The Trade Prince's yacht is about to set sail. Everyone, get to the dock! Hand over the keys, boss. I'm driving. Just let me know when you're ready to go.

Talk to Sassy again
We gotta finish up here and get you to the dock before the Trade Prince leaves us all behind!

On the trip
Sassy is a, well, crazy... driver. She sprints down the highway, but the Kaja'Cola balloon is in the way!
Sassy Hardwrench says: We'll have to go around.
Sassy Hardwrench yells: OUT OF THE WAY!
Dodging the balloon, Sassy deftly runs over anyone in her path to get to Gallywix's yacht. She jumps the hot rod onto the deck and spins it to a stop, realizing the situation...
Sassy Hardwrench says: Here we are, safe and... OH NO! We've been double-crossed!

Everyone on the ship is enchained and cowering in fear besides the mooks, Candy Cane, Chip Endale, and Gallywix.

Upon completion, a cinematic plays

Gallywix's yacht sails away from Kezan as the volcano begins to erupt.

Trade Prince Gallywix: Get down in the hull you worthless SLAAAAAAAAVES!

Days later, Gallywix's yacht is sailing through a thick fog. Two navigators are arguing at the helm.

Navigator 1: This is all your fault! We were supposed to have these stupid slaves to Kalimdor days ago!
Navigator 2: I'm not taking the fall for this one, you're the one who got us lost!
Navigator 1: What does it matter? Gallywix is gonna have both our heads!

Explosions can be seen and heard through the fog.

The goblins poke their heads over the edge of the ship. The yacht leaves the fog, allowing the goblins to see several Alliance ships bombarding a lone Horde ship. The navigators scream. On one of the Alliance ships, two humans notice the yacht.

Alliance First Mate: Captain. Who are they?

The Captain peers through a spyglass at the yacht.

Alliance Captain: It doesn't matter. Our orders are to capture the Horde target at all costs. No witnesses.

The Alliance ship aims it's cannons at the yacht, and fires. The navigators attempt to steer the ship out of the way, but to no avail. The cannonballs devastate the engines, causing a massive explosion. One of the navigators runs across the deck.

As the other goblins flee for the escape pods, the slaves Gallywix has acquired are being left in the brig.

Multiple escape pods blast into the sky. The yacht begins to sink at the stern, causing the ship to tip upwards. The slave grips onto the brig's bars, but looses his grip and falls.

As the ship tips higher and higher, the Alliance ship blasts it one more time, sinking it for good, sending several goblins into the sea.