Light's Hope Chapel is the Argent Crusade base of operations in the Eastern Plaguelands, and a place of comfort for those who make the journey here.[1] Located on the slopes of a mountainous area east of the region, it serves as quest hub for both Horde and Alliance heroes. Originally, as the name implies, a mere chapel, it expanded into a full-fledged fortified outpost after the end of the Northrend campaign.

Underneath the chapel is a catacomb which houses the remains of the heroes of Lordaeron. Many of the remains were exhumed from around Lordaeron and moved to the chapel so they could not be resurrected in the service of the Lich King.[2] 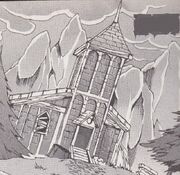 Light's Hope Chapel before the Cataclysm.

After Arthas's rampage through Lordaeron, Lord Maxwell Tyrosus and a few others were chosen for the secret task of unearthing the bodies of a thousand fallen heroes of the Light and bringing them to Light's Hope Chapel. It is there they were interred once more in sacred ground. This was done to protect the honored dead from being raised as nothing more than cogs in the Lich King's undead army.[2] One of them was Killoren.[3]

After Alexandros Mograine's death, some paladins separated themselves from what would become the Scarlet Crusade and formed the Argent Dawn. After leaving Tirisfal Glades, they went deep into the Eastern Plaguelands and made the Light's Hope Chapel their main base. As a new faction they allowed all races to join, even members of the Horde. From there they would fight the undead their own way, even sending most recruits to Stratholme. Even though they officially dettached themselves from the Scarlet Crusade, they still allowed negotiations with that group. Lord Raymond George was their first leader, but when he died Lord Maxwell Tyrosus took his place.

Siege of the Sanguine

The Siege of the Sanguine was an attack on Light's Hope Chapel by a large army of undead Scourge led by Kirkessen the Zealous. Fortunately, the attack was quickly repelled and Kirkessen suffered an incurable wound from Lord Maxwell Tyrosus that made Kirkessen unable to serve the Scourge in corporeal form. These events are related in the Compendium of Fallen Heroes.

Tirion Fordring and some of his reformed Knights of the Silver Hand joined the Chapel at some point.[4]

The Chapel was used as a meeting point by the Argent Dawn, Brotherhood of Light and Scarlet Crusade during the Scourge Invasion heralded by Naxxramas.

Darion and Argent Dawn forces battle undead before the chapel.

Some time after Alexandros Mograine was turned into a death knight, the lich Kel'Thuzad led a Scourge assault against Light's Hope Chapel. Tirion Fordring arrived and joined the Argent Dawn's forces, helping turn the tide. During the battle, Darion Mograine ran the Ashbringer through his own chest as a final act of faith and love to free his father's soul. The spirits of the thousand heroes interred below the chapel brought forth a reckoning against the Scourge then, decimating the undead ranks surrounding the troops of the Argent Dawn. Unfortunately, the price for Alexandros Mograine's soul was the soul of his son, Darion Mograine, who became a death knight himself.[2]

Darion and his undead forces before the attack on the chapel.

Years after Arthas became the Lich King and entered deep slumber, he awoke and rallied his troops to prepare them for a campaign in the Eastern Plaguelands to raise soldiers for the Scourge from underneath Light's Hope Chapel.[3]

The Lich King arrived with the necropolis Acherus and started a bloody war again the Scarlet Crusade. The Scarlet lands fell and their death fueled the Scourge war machine for their main objective. Thus, the Battle for Light's Hope Chapel began. With a superior Scourge army they marched in ambush as they prepared for a final strike. When the Argent Dawn had lost a third of their forces, Tirion Fordring appeared and destroyed all of the Scourge. The remaining undead army was brought before him, and only Orbaz Bloodbane escaped. At that moment, the Lich King showed up and revealed that the main reason for the attack was to make Tirion come out of hiding, regardless of how many Scourge forces and death knights would perish. The death knight Darion Mograine had a turn of heart and gave the Ashbringer to Tirion, who used it to injure the Lich King. Arthas was forced to flee, thus ending the battle.

After this event, the Argent Dawn merged with the remaining Knights of the Silver Hand in Lordaeron to create the Argent Crusade, an order made for the campaign in Northrend to defeat the Lich King for good.

With the death of the Lich King and the fall of Icecrown Citadel in Northrend, the Argent Dawn, now merged with the Knights of the Silver Hand and reformed into the Argent Crusade, began to rebuild and fortify the area, turning it into a beacon of light in the otherwise eternal gloom of the Eastern Plaguelands, and constructing a statue dedicated to their High Lord Tirion Fordring. The Order has continued to recruit heavily to their cause. Prospective members must complete a Trial, which involves defeating the spirit of the former leader of the Argent Dawn, Lord Raymond George.

The Sanctum of Light beneath Light's Hope Chapel becomes the Class Hall for the restored Knights of the Silver Hand, accessible by a trap door in the floor of the chapel itself.

The priest champions of the Conclave visited the Chapel in order to get pure Light. They killed Plaguemonger Pustulus and blighthounds.[5]

Silver Hand's ongoing offensive within the Broken Shore has drawn the interest of many paladins who wished to fight under the leadership of the new Highlord. The Highlord judged the new recruits themself and revealed that the chapel grounds were infiltrated by the nathrezim Volzarak the Deceiver who had disguised himself as one of the recruits.[6]

The Chapel was once again invaded by the Knights of the Ebon Blade. The Deathlord raised undead from Chapel's crypt and sent it to attack Argent sentries while Darion and his three horsemen entered the Chapel, captured Tyrosus, and entered the Sanctum.[7]