Each well is a physical manifestation of the Light.[1]

Lightwell is a Holy priest ability, learned at level 36, that conjures a very shiny healing well. Every second it will attempt to give party and raid members a 6 second buff (Lightwell Renew) that heals for a notable amount while the buff is active.

This section is flagged for a fact check!

[Glyph of Lightwell] significantly changes the functionality of Lightwell, requiring players to actively interact with the well in order to receive healing. While much of the above applies equally to both forms, below are some notes and tips specifically regarding the modified Lightwell. 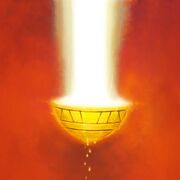 Prior to Patch 5.4.0, Lightwell featured the functionality now found through

[Glyph of Lightwell]. The Lightwell did not heal targets automatically, but instead required players to click on the well in order to receive healing.

This functionality in its time engendered a significant amount of controversy and complaints from priests and non-priests alike, although some argued that the greatest factor in the failure of Lightwell as a useful healing tool lay in the lack of education of the playerbase. Over time Blizzard granted progressive buffs to Lightwell, but the spell failed to receive whole-hearted acceptance by most players due to the requirement for their own active interaction, preferring to leave the healing to the healers.

[Glyph of Lightspring], providing priests with an alternative functionality for the well. Apparently this alternative was well-received, as with Patch 5.4.0 the new design was adopted as the default functionality of Lightwell.

Lightwell was situationally an extremely powerful healing spell, but had a lot of bad reputation and stigma spanning from years of being oversold by Blizzard while being a rather underwhelming ability. The spell was often jokingly referred to as "lolwell" by both priests and non-priests alike, and frequently saw more action as a location raid marker than a healing spell.

Since its conception, Blizzard has given multiple buffs to Lightwell, each often doubling the potency of the spell. Following Cataclysm, the spell became more useful since the healing model no longer required everyone to be topped off within 3 seconds, but its value was only there if the priest's group actually used it. There was still a lot of bad feelings connected to Lightwell, and it was very rare for the Lightwell to be used in pugs.

Lightwell had a rather massive healing potential, and a major topic of discussion was whether Holy Priests were balanced against having Lightwell. If this were the case, then Holy Priests would naturally have a lower output than other healers, able to reach the same potential as other healers only if other players actually use the Lightwell. This could mean that Holy Priests put additional workload on their group to achieve the same result as another healer. On the flipside, if priests were not balanced against having Lightwell, then Holy Priests were potentially the most powerful healers out there as long as the Lightwells were used. No conclusive evidence of either situation was produced, but either case was perceived as bad from a balance point of view.

One of the key factors affecting the success or otherwise of Lightwells was the awareness of other players. Many priests suggested using macros to both announce the placement of a Lightwell and to inform players of its purpose. Within guilds many priests reported good usage, once guild members were familiarized with its design, with many non-priests praising Lightwell very highly. However, within pugs this was much harder to achieve, requiring routine explanation (for which macros may be excellently suited) in order to secure player interaction.

Without education, the majority of players in pugs appeared to be unaware of the nature and use of Lightwells. Consequently Lightwells placed in such groups often went unused, or were used ineffectively, such as by players at full health. Many priests encouraged a gradual process of education of the community, so that players would eventually become more aware of the functionality of Lightwells and make use of them when they appeared. Some players however remained dismissive and hostile towards the use of Lightwells, citing difficulty in using them (especially for melee damage-dealers) and disagreement with placing the burden of responsibility upon non-healers as some of their reasons.