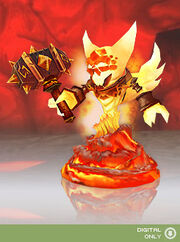 From the Pet Store

It's never too soon to summon this tiny aspect of the dread Firelord.

Your foes will be purged by fire with Lil' Ragnaros on your team.

Taste the miniature flames of Sulfuron - Get your guildmates fired up with Lil' Ragnaros, the mini-elemental lord. Not only can he serve as a cooking fire, but he'll also sporadically ignite nearby critters that wander too close to his burning form. As a being of pure elemental fire, he will even submerge into the world's molten core when you start moving and then reemerge next to you wherever you stop.

Elemental: Ignores all negative weather effects. Enemy pets can still gain the beneficial effects from weather when facing an elemental.

This companion is a miniature version of Ragnaros, who mails it to players:

Insect! You boldly seek the power of Ragnaros?!

Now you shall see it firsthand!

Well… at least a little of it. I may have summoned him too soon. 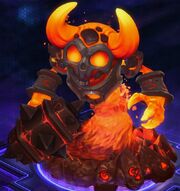 Lil' Ragnaros in Heroes of the Storm.