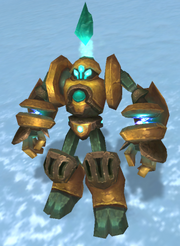 As of August 23, 2012, any players who subscribed to the World of Warcraft Mobile Armory got a free Lil' XT until the Armory itself became free. On August 14, 2017, with the release of StarCraft: Remastered, this pet was included in the korean-only collector's edition package.

With the See You Later Bundle on December 20, 2019, this pet was available at a discounted price with other items. On January 19, 2019, the pet is no longer available for purchase as it entered hibernation in the Blizzard Archive.[1]

Modeled after the huge titan prototype in Ulduar, this volatile little construct plays hard with its toys.

Everybody's ready to play when Lil' X.T. is around.

Don’t break it this time - Programmed with boundless energy and a child-like enthusiasm, Lil’ XT, the mini-Deconstructor, awaits adoption by a capable and adventurous parent. Despite his diminutive size, Lil’ XT can still fracture the ground beneath his feet with his tiny tympanic tantrums that discharge massive amounts of electricity into the air.

This companion is a miniature version of the XT-002 Deconstructor. Players are mailed this pet by Jepetto Joybuzz:

Are You Ready to Play?

You are now the proud owner of the latest cunningly-crafted Wonderworks original: the awesomely adorable automaton, Lil' XT!

This self-winding, steam-powered sidekick is certain to bring a smile to everyone's face. Have fun!