“We will throw this one back, just like the others. And we will hold until the reinforcements come. As long as men with stout hearts are manning the walls and the throne, Stormwind will hold.”

Llane Wrynn I[1] was the ruler of the Kingdom of Stormwind during the First War. He was the child of King Barathen Wrynn and Lady Varia, and the father of King Varian Wrynn. His grandson King Anduin Wrynn was given his middle name Llane to honor him. 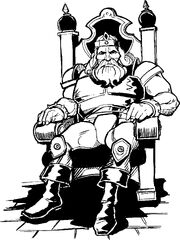 Llane was born in the year 564 by the accounting of years (40 years before the First War)[2] formerly used in that kingdom. Llane spent his childhood with Medivh and Anduin Lothar. One day, while out on the road in Stranglethorn Vale, Medivh and his two friends were ambushed by three jungle trolls. None were hurt badly, however, Medivh fainted after casting several spells.[3] In 577 (according to the Last Guardian, Medivh's coma lasted 20 years, hinting at larger timeframe), Llane reached to the Age of Ascension and was given the full title Prince of Stormwind. During the evening feast arranged to honor the young Prince, the great wizard Medivh, who had been absent from events of the world for many years, interrupted, announcing his return to the world and giving an obsidian hourglass to Llane, symbolizing Stormwind's unending prosperity. The sands in the glass ran, but the top half never emptied into the lower half.[4]

Years after the Gnoll War, Stormwind's farmers and settlers would increasingly push southward claiming territory close to the jungles of Stranglethorn Vale, home of the Gurubashi Tribe. Skirmishes would erupt between the Gurubashi and Stormwind forces but the elderly Barathen would refuse to order an invasion into Stranglethorn and was focused on fighting a defensive war, much to the outrage of his son Prince Llane. While King Barathen's strategy against the Gurubashi was effective it would be unable to stop every attack, one which saw slow, barbaric, and gruesome deaths delivered to the villagers of three towns in Westfall. This would ultimately prove to be final straw of Prince Llane, Anduin Lothar and Medivh, who in defiance of his father's continued de-escalation, journeyed south to bring war to the Gurubashi. Though initially shielded by Medivh's magic the three friends would end up in the fight for their lives when they battled Jok'non, a Gurubashi Warlord empowered by Hakkar the Soulflayer. Ultimately the three friends would be prove victorious and return to Stormwind, shaken by Medivh's powers.

While none of the Gurubashi who witnessed Jok'non's death survived, it took very to the imagination for the trolls to see who was responsible. Rallying under Jok'non's son, Zan'non, the Gurubashi launched an invasion intent on destroying Stormwind. In the face of the troll onslaught Barathen recalled all his forces to the stronghold's gate, believing that the survival of Stormwind would depend on one colossal battle. As the death toll mounted on both sides Barathen mounted a desperate counterattack against the Gurubashi. Though almost succeeding in claiming Zan'non's head, Barathen would die on the field of battle. Llane, driven by guilt, would plead with Medivh to unleash his power on the Gurubashi as he done against Jok'non. Though frightened of his power Medivh would accept Llane's request and destroy the Gurubashi forces (Zan'non included), an act that would ultimate avenge Barathen. With his father's death and the victory over the Gurubashi, Llane would be welcomed as Stormwind's new ruler.[5]

Llane Wrynn's son, Varian Wrynn, was born to him in Stormwind City ten years before the First War.[6] He taught him how to ride a horse and oversaw his combat training.[7]

When reports of mysterious creatures lurking around the Black Morass reached Stormwind, rumors spread through the streets that they were either vengeful spirits, trolls armed with some new breed of power, or a strange race from across the Great Sea. King Llane dispatched Anduin Lothar to uncover what these new creatures were. Lothar led a small force of the Knights of Stormwind to scout the Black Morass, resulting in humans clashing with orcs for the first time in a series of bloody skirmishes. Lothar and his men scored a number of small victories, yet for every orc killed two more seemed to take its place. The humans were more outnumbered in each subsequent battle, and Lothar was eventually forced to pull back without venturing deep enough into the heavily guarded Black Morass to find the Dark Portal. Lothar informed King Llane the invaders were bringing in reinforcements from somewhere, and the kingdom readied itself for a full-scale war that became known as the First War.[8] Llane had named Lothar the "King's Champion", the highest military rank in the kingdom, and entrusted him to end the orcish threat.[9]

Messengers were dispatched by King Llane to the other human kingdoms, warning of mysterious, fearsome green-skinned invaders. However, no help was received as the reports were not believed. Lordaeron was considered the most likely nation to help. However, Deathwing disguised as a visiting Stormwind noble openly mocked King Llane and claimed the threat was actually a rebellion of disgruntled citizens, causing Lordaeron to only politely wish Llane luck with his troubles. In the past, Stormwind had prided itself on standing alone and developed a policy of isolationism in recent decades, which many other nations saw as arrogant and likely influenced their passiveness.[9]

After Brightwood, Westfall, and the Redridge Mountains had eventually fallen, the Horde marched onto Stormwind City. Thousands of Horde soldiers marched through Elwynn Forest and encircled Stormwind, cutting off all access except for the sea. Warchief Blackhand had ordered Kilrogg Deadeye and Cho'gall to lead their Bleeding Hollow and Twilight's Hammer clans in the assault on Stormwind. To weaken the city's defenses, siege engines bombarded the city walls through the night, and at dawn Kilrogg and Cho'gall launched their attack. While orcs charged the battlements, warlocks engulfed Stormwind's soldiers in fel fire, resulting in staggering losses. As it seemed Stormwind would fall that day, suddenly cries of an attack came from the Horde's rear lines. Lothar and the majority of Stormwind's knights had moved around the Horde by sea. The King's Commander was now leading a charge through Elwynn Forest, catching the orcs in the rearguard completely by surprise as the knights cut through their lines. As the Bleeding Hollow and Twilight's Hammer tried to push back the knights, Stormwind's large gates opened and soldiers poured out of the city to flank the orcs in a counterattack. Outflanked on both sides and suffering many casualties, the orcs were left with no choice but to flee. This was the greatest disaster to ever happen to the Horde, which withdrew to Redridge to devise a new plan.[10] Lothar and King Llane had received information about the Horde's battle plans from Medivh's apprentice Khadgar, who had learned of them from Garona Halforcen, which helped prepare for the attack on Stormwind.[11]

As the war effort was continued by King Llane and Anduin Lothar, the pair of friends were also never able to gather accurate data of the orcs' numbers and could only guess at how great a force they would have to contend with.[12]

King Llane sent many surveyors into the hills and mountains throughout the kingdom in search of new deposits of gold.[13]

At some point, Llane was visited by a mysterious stranger who revealed herself to be Aegwynn, the mother of Medivh. She revealed that Medivh was behind the arrival of the orcs into the kingdom, warning that Stormwind would eventually have to deal with him.[14] Later, Khadgar and Garona revealed Medivh's treachery in the middle of the war.[15]

Garona about to assassinate Llane in the Warcraft: Orcs & Humans manual.

As the forces of Stormwind and the Horde clashed across the kingdom, internal conflicts began to take their toll on both armies. King Llane, who believed the bestial orcs to be incapable of conquering Stormwind, contemptuously held his position at his capital of Stormwind. After a few years the majority of the orcish Horde had crossed into Stormwind, and Gul'dan deemed that the time for the primary strike against humanity had come. The Horde launched its full might against the unsuspecting kingdom of Stormwind.[12]

Eventually, the war began to turn badly for Stormwind. After losing ground to the Horde's new found organized and brazen assaults, Llane prepared his armies for a counterattack. Sensing that the final confrontation was at hand, Llane rallied the armies of Stormwind against the orcs. Some time later, Garona Halforcen and Khadgar revealed Medivh's role in bringing the orcs into Azeroth. Despite this information, Llane could hardly believe that the magus would willingly betray Azeroth and that all his actions could be justified as part of a brilliant scheme. Llane felt confident in Medivh's allegiance and that his army and Medivh would be enough to beat back the Horde.[16]

Garona assassinating Llane in the World of Warcraft comic.

Warchief Blackhand's second in command, Orgrim Doomhammer, set out to free the Horde from demonic corruption and ultimately assumed the role of warchief of the Horde by killing Blackhand, the corrupt puppet of Gul'dan. Under his decisive leadership the relentless Horde finally laid siege to Stormwind Keep once again.[17] King Llane organized the city's defense with his military commanders in Stormwind Keep and the orcs were held at bay even as the city walls were breached and fighting took place in the streets.[18]

When Garona had returned back from the raid in Karazhan, she became a close friend and adviser to Llane, but also secretly an agent of the Horde. As the orcs besieged Stormwind itself, Garona (under mental control of the orc Shadow Council) sorrowfully assassinated the beloved king,[12][19] cutting his heart out[20] with the Kingslayers. Garona knew from a vision she had seen in Karazhan that she was fated to kill one of the few men who accepted her for what she was, and thus it was King Llane's assassin who mourned him most of all. His son Varian could only helplessly watch.

During the Burning Legion's infiltration of Karazhan, a vision of Lothar and Llane visiting Medivh while he was still in a coma. 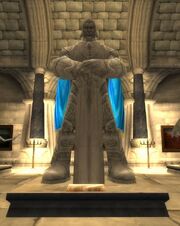 Until its removal in Cataclysm, a statue of King Llane could be found in Stormwind Keep; the plaque reads:

King Llane I of the House of Wrynn

Llane Wrynn from a separate timeline[30] appears in the Warcraft film universe.