Loch Modan is a large area east of Dun Morogh, situated in eastern Khaz Modan. It is known for its temperate climate, abandoned archaeological dig site and, until the cataclysm, the huge lake from which the region takes its name. The gray and rugged mountains rise up on all sides around the loch, and the hills are lightly wooded with pine and birch. The loch was held in place by the now broken Stonewrought Dam, an architectural wonder of no equal on Azeroth. The dam was destroyed when Deathwing burst into and flew over Azeroth, and its destruction caused the loch to drain and cause massive changes to the area.

Loch Modan is heavily populated by hostile troggs, unearthed from caves below ground by the dwarven digs. They have since settled in the surrounding mountainous area and built crude camps and caves from which to strike at passing travelers. Other dangers include dangerous wildlife, aggressive kobolds, and the powerful ogres of the Mo'grosh Stronghold.

Despite its serene appearance, Loch Modan has seen its share of conflict and bloodshed. In the Second War, the orcs of the Horde overran Loch Modan and made a stand against the defenders of the Alliance. The dwarves of Ironforge were ultimately successful in their defense, and reclaimed the area in the war's aftermath. Broken catapults and ballistae can still be seen scattered about on the bottom and islands of the loch, mute evidence to the region's bloody history.

There are no instanced dungeons or battlegrounds in Loch Modan. However, the micro dungeon Mo'grosh Stronghold can be found in this area.

Since the Alliance has no travel hub in the Badlands, they have to fly to Thelsamar in Loch Modan and ride from there to get to Uldaman. Newer players are often unacquainted to the higher-level activity in a teens level zone in comparison to the starting zones they have come from.

A topographic map of Loch Modan.

Loch Modan is home to several dwarves of various levels of importance. In the Valley of Kings, Captain Rugelfuss sends promising young dwarves to eradicate the troggs who infest the region. At the Stonewrought Dam, Chief Engineer Hinderweir VII seeks to rid Loch Modan of the vile and terrible Dark Iron dwarves. And at his excavation site, the unlucky Prospector Ironband recruits "slightly" more experienced adventurers to investigate the ruins of Uldaman.

Loch Modan is the level 10-20 destination zone for dwarves and gnomes from the adjacent starting zone of Dun Morogh. However it is easy enough for all other Alliance races to quest here, via the Deeprun Tram from Stormwind. 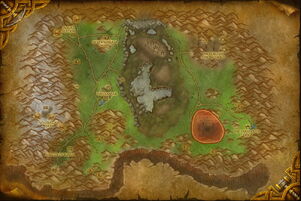 Loch Modan only has one dig site:

Many things happened in Loch Modan with the Cataclysm, with Twilight hammer cultists attacking, dark iron dwarves up to their old tricks, the loch drained dry and murlocs, gnolls and kobolds creating an alliance.

Loch Modan is the heartland of the proud and feisty Ironforge dwarves. Although the Horde drove the dwarves into seclusion and guerilla warfare in the Second War, they have returned to their homeland and thrive once more. This region is the source of Ironforge's mercantile strength.[2]

Few enemies can penetrate the mountains around Loch Modan, and Algaz Gate serves as an effective barrier, so the region is perhaps the most peaceful in the eastern continents.

Like all Ironforge dwarves, Loch Modan's denizens are industrious. They fish, mine, cut lumber and smith weapons with great alacrity. It can be dangerous region, but it is largely civilized and subject to constant Ironforge patrols, though it bears the air of a frontier, wilderness area, and it is home to vicious predators and ever-present troggs.[3][2]

The rampaging orcs overran Loch Modan in the Second War, but in the war's aftermath the dwarves returned and reclaimed their land. The Wetlands to the north didn't have such luck as Horde and Scourge forces devastated them in the Second and Third Wars, forcing the Ironforge dwarves to retreat to Loch Modan and Dun Morogh.[3][4]

Goblin sappers, hired by an unknown enemy, blasted Dun Algaz Gate and severely damage the edifice. The gate had to be repaired before another attack. King Magni Bronzebeard offers a sizable reward to whoever discovers the enemy behind the sabotage.[3]

The cold, wet, and mountainous Loch Modan lies in the foothills of Ironforge Mountain. To its south are the Badlands and the Searing Gorge; while to the north, after crossing Dun Algaz Gate, lie the Wetlands. Loch Modan is a lake — the largest body of fresh water in the world of Azeroth. It teems with fish, and the surrounding mountains are rich in timber and precious metals. Dwarves and their allies fish the lake, mine the cliffs and cut the timber.

The region is constantly gray and cold. The sun burns through the mist rarely, creating a twilit world of rolling wisps and limited vision. Constant rainfall keeps the land lush and green. A bitter chill claims the mornings and evenings, though warm currents from the eastern seas prevent the loch from freezing. A bit too rugged for human sensibilities, but perfect for dwarves. The air smells better in Loch Modan, and the humidity is a stark contrast to the Badlands.[2]

The loch is massive, occupying a great deal of Khaz Modan, and it seems no one has ever measured it. Three large islands grace the lake's interior. Upon the northernmost island are ruins from the Second War, while the southern islands are barren save for occasional Stonesplinter troggs and crocolisks. Huge gray mountains rise up on all sides around the lake, while pine forests cover the area.[2]

The lake abounds with fish, including piranhalike frenzies, and its fish population draws a variety of predators to the area. Black bears and threshadons frequent the shoreline, the bears snatching fish from the water while the threshadons chew on the aquatic plantlife. The threshadons occasionally try to run off fishermen as well, so dwarves use them for target practice.[3]